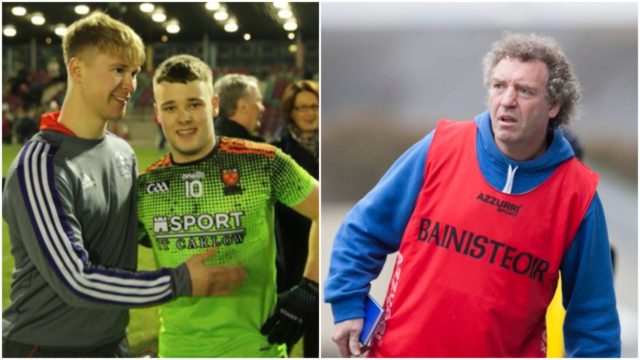 IT Carlow are hoping to make history tonight by reaching their first ever Sigerson Cup final.

The Third Level Institution have shocked many in the college GAA world this year by dumping out two fancied sides to make it to the semi final where they play Letterkenny IT in Inniskeen at 7pm.

David Clifford’s IT Tralee were first to be taken down by IT Carlow and they showed at the weekend that this was not fluke as they knocked out the holders.

Billy Morgan’s UCC traveled to Carlow on Sunday and were sent packing.

There is a huge Laois presence on the team with Park-Ratheniska’s Richie Hitchcock, Graiguecullen’s Trevor Collins and Killeshin’s Evan Lowry all starting while the side is managed by Portlaoise’s Pat Critchley.

Lowry contributed 1-2 in the win at the weekend and, speaking to Midlands 103 afterwards, he says he is taking on game as it comes.

Lowry said: “We’ll take them as they come and we’ll try get the win, we’re in a great position and we’re kind of on a roll now and everyone’s playing well together so we’ll just worry about the next one now.

“These are the lads you go around the college with, some of these are your best friends like you go to class together, its nice to get a break and come out here and get the win and go far hopefully.”

Manager Critchley said this is a huge opportunity.

“Its very innovative and the boys are willing to listen and learn and take things on.”

Elsewhere today, there will be Laois men on opposing sides as DCU and UCD meet in the other semi final.

Gary Walsh and Darragh Connolly are with UCD while Mark Barry is on the DCU team and that game will take place at 6pm in DCU.

SEE ALSO – The highlights, challenges and advice from the Mahers after All Ireland’s Fittest Family experience