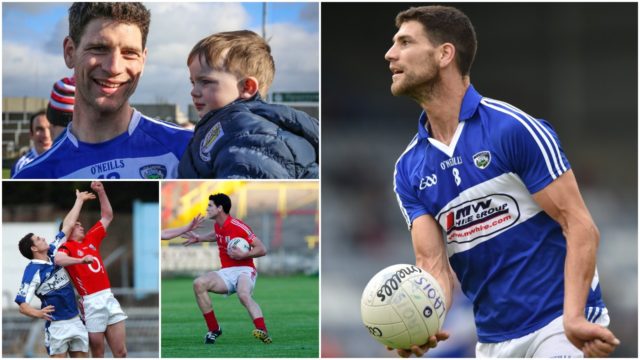 For the first time since 2006, Laois fans will not be treated to the high-fielding exploits of Brendan Quigley.

The 34-year-old Timahoe native is not part of the Laois panel for the coming season for the first time in 14 years as he has retired from the inter-county game.

Quigley confirmed the news to LaoisToday this morning and it brings to an end a glittering career in blue and white.

He was midfield on the minor team that won the All-Ireland in 2003 and then Leinster in 2004.

At senior level, the Timahoe man made his championship debut for Laois in 2006 against Carlow and has been more or less ever-present since.

Quigley went on to make 43 championship appearances in all. Only six players over the past 20 years have appeared more often than him.

He received an All-Star nomination in 2012 when Laois, under Justin McNulty, reached the All-Ireland quarter final where they lost 1-12 to 0-12 against Dublin.

He spent one year away from Laois in 2014 when he emigrated to America for work and ended up captaining New York in the Connacht championship.

He also spent a brief spell with Australian Rules club Brisbane Lions in 2005 having earlier impressed with the Ireland U-18 international rules side.

Injury saw him miss virtually all of the 2018 season but he returned to the playing field towards the end of the league in 2019 and played a crucial role as Laois secured promotion to Division 2.

He made his first appearance in Round 7 of Division 3 when he came off the bench to change the game as Laois went on to defeat Carlow and clinch promotion.

Quigley’s last appearance for Laois came as a second half substitute in their Leinster semi final defeat against Meath.

Quirke said: “Brendan Quigley has stepped away, and while he didn’t feature hugely for Laois last season, he’s another who has devoted huge time and effort over the years.

“He always gave his best for the jersey and we wish him all the best in his retirement.”

The Laois footballers begin their Division 2 league campaign away to Roscommon on Sunday at 2pm in Dr Hyde Park.

SEE ALSO – In Pictures: All glitz and glam at Rathdowney-Errill Dinner Dance