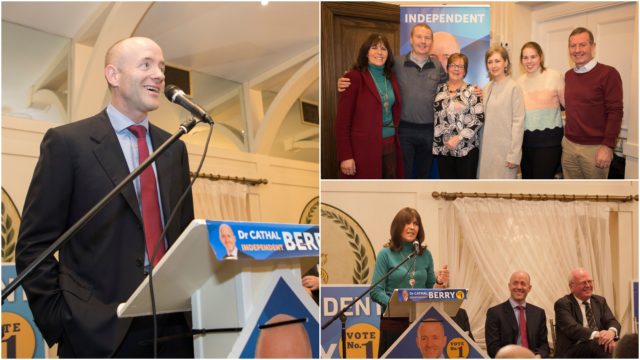 Portarlington resident Dr Cathal Berry launched his bid for a Dáil seat in Kildare South in front of 150 people in the Keadeen Hotel in Newbridge last night and declared: “We’re going to be the story of General Election 2020.”

The former Defence Forces member and qualified medical doctor was endorsed in a speech by former Tanaiste and minister and current independent Senator Michael McDowell who served as a Defence Forces reservist himself.

Independent Senator Gerard Craughwell and local Portarlington businesswoman Bernie Bracken – who runs Eamon Bracken Menswear along with her husband – also spoke in support of Berry while former Portarlington councillor Paul Mitchell (PD and later independent) was in attendance too.

Addressing the audience, Berry, who was led into the room by a piper and to a standing ovation, said: “I think there’s something stirring in South Kildare. We’re going to be the story of General Election 2020.”

He added: “I’ve been blown away by the support and positive reaction I’m getting on the doorsteps and on the streets over the past 10 days.”

He told the audience: “It is great to see so many people from Portarlington here tonight.

“With over 12,000 people living in the Laois-Offaly part of the constituency it is critical that they are empowered by locally based Dáil representation..

“As someone who has lived in Portarlington for 16 years I understand that having a Laois-Offaly based representative is essential.

“There are four seats in this constituency, so three can go to Kildare but one just must go to Laois-Offaly.

“I’ve already identified my planned constituency office on the Main Street in Portarlington to ensure access to a TD for people from Laois-Offaly.”

To loud cheers, he added: “With your help I’ll be occupying it in just 18 days’ time!”

Berry insisted that the demand for an Independent TD in South Kildare is undeniable and that the recent upgrading to a four-seat constituency presented an ideal opportunity.

He continued: “As an independent representative I won’t be shackled to the party whip system. I can do the right thing, not the party thing.

“Independent politics has delivered for other constituencies all over the country. Now it’s the turn of Kildare South.”

Outlining his policy platform, he said the public health system is in crisis and is completely overloaded.

He added: “I have the personal expertise and experience acquired in this area to be brought to bear on this problem.

“I will not be deflected by bureaucracy or dated thinking.”

Berry also pointed to a major housing problem in the constituency, which he said was compounded by the number of houses owned by the state that are not in use.

On the issue of climate change, he said it was vital that the public are incentivised to insulate their homes and transition to electric vehicles.

He said: “This will also result in significant reduction in the cost of living for hard pressed families.”

He continued: “A lack of public transport needs to be addressed. There’s not enough capacity, tickets are too expensive and facilities need to be modernised.

“Something as basic as toilet facilities in Newbridge train station haven’t been open for months. This tells all you need to know about our public transport system.

“It is in need of major investment, NOW.”

On the issue of education, Berry said he repeated his Leaving Cert in Colaiste Iosagáin in Portarlington and that he fully appreciates the need for a new school in the town.

He also told supporters: “I want more support for creche, early childhood, second and third level students are vital if we wish our society as well as our economy to thrive.

“These must be policy priorities for the next government.”

He went on: “Driving through the Camp is like going back 100 years in time.

“It needs major refurbishment and investment in accommodation to bring it up to the standard of every other university campus in the country.

“Furthermore, the resourcing of the Reserve Defence Force, the establishment of a Veterans Affairs Office and the creation of a Families Affairs Office to provide supports of military families must also be introduced.”

In a final message to the room, Berry added: ” If you want change you have to vote for it. But don’t just vote to make change, vote to make history!”