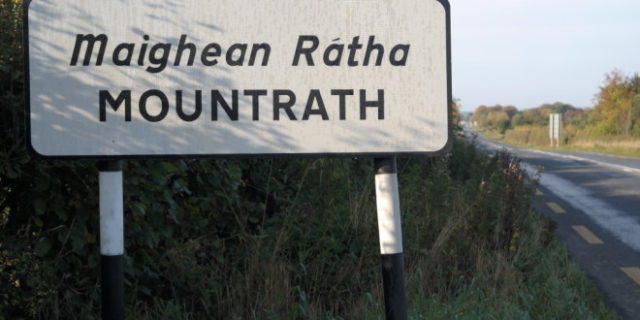 A Laois town is this week in lockdown and under siege it has been alleged.

The sensational and extraordinary claim was made at a meeting of Laois Councy Council this afternoon.

According to the elected representatives from the area local residents are living in fear, businesses are being affected and the pubs in the town have shut up shop.

The stark situation in Mountrath centres around a large convoy of caravans which arrived in the town ten days ago and set up camp.

The issue was raised by Cllr James Kelly who said he was compelled to highlight the situation which was impacting on the town of Mountrath.

“The elephant in the room here is that businesses are being hit, the pubs are closed and the entire town is in lockdown and under siege since these caravans arrived into town.”

The scenario he was describing concerns the caravans that converged on and have set up camp on private land on the Shannon Road in Mountrath on last Thursday week, January 16. Cllr Kelly maintains that more caravans are arriving all the time.

While he commended the local authority and the various departments in County Hall for all their assistance and swift response in serving an enforcement order, he wanted to know when would the situation be resolved.

“These things seem to take a lot of time,” he observed.

“In the meantime more and more caravans are arriving all the time. They have no respect or regard for anyone. It’s a huge issue.

“They are breaking all the planning laws, there are fire safety issues, there are sanitation issues and they are partying until 3 and 4am in the morning.

“There are generators going round the clock. The Gardai have been out, the enforcement notice has been served but how long will this process take, what is the timerframe,” he asked the Council officials.

Cllr Conor Bergin agreed that urgent intervention is required as the matter had been raised extensively with him too.

“There is no question but there are health and safety hazards here and no doubt that there is a fire safety concern with so many caravans parked up together so closely.

“We all remember what happened in Carrickmines and we certainly don’t want a repeat of that tragedy and here we have caravans on top of each other and generators going non stop.This needs to be addressed as soon as possible.”

Cllr John Joe Fennelly, who also has a business in the town, echoed these concerns. The whole situation was unfair on the townspeople ,he said.

“The pubs are closed. It’s so unfair on people who are afraid to walk up the town or to socialise.

“There are elderly people afraid to go outside the door. The Council acted swiftly but it’s a terrible situation there at the minute where you have people afraid to walk up the road. We have to help out the community and there is definitely sanitation and fire safety concerns with this encampment.”