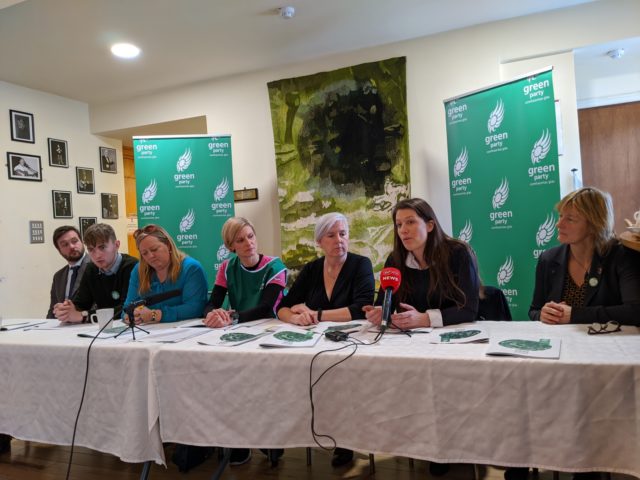 The manifesto includes ‘decent bus services, post offices, easy access to local shops, jobs in the local community and access to a doctor or to mental health care.’

It is a ten year challenge to ‘improve our quality of life in rural Ireland.’

They promise to ‘support farmers as they work towards a more secure future for their farm holdings, their local areas, their trade networks and the country as a whole.’

Pippa began by saying: “Our rural manifesto sets out a vision for what we see rural Ireland to be like, its about working to restore our natural world but also in improving the quality of lives of people in rural Ireland.

“This is really a ten year challenge , that’s why we have called it ‘Towards 2030 a Decade of Change’ and we really have to see it as a long term challenge but it can be done.”

Pippa passed over to Grace O’Sullivan to start, Grace said “For rural Ireland today, the European Parliament is offering Ireland a huge opportunity because being green and recognising that the climate crisis and the biodiversity decline is necessary.

“There are so many opportunities and that’s why we need people like Tate because Tate is young and bright and energetic and the future is all before him so we need the Tate Donnellys of the Green Party to get into Dáil Éireann.

“We don’t need some stale oldies that have been holding seats traditionally that don’t get it, they don’t get climate change!

“So we need a good mixture of people in Dáil Éireann and for me its time for the greens that we are the ones who can get in and deliver cause we really do get what is happening in our world.”

Roisin garvey added: “What I see personally from going door to door and living on a farm is that rural Ireland has been abandoned everything we have in rural Ireland we have done for ourselves.

“I want the greens to be in the next coalition but I am going to make sure we have strong rural green voices in the next government it is essential for rural Ireland for that to happen.”

Tate Donnelly spoke next on the youth in rural Ireland; “Young people in Ireland and in particular rural Ireland really do feel that they have been left behind.

“If you’re a young person living in rural Ireland you’ve been given a real lack of opportunities at the minute, everyone is telling the young people not to get into farming because there’s no future, farmers children are being told to get a college education and then when they do they’re forced to move away to cities and abroad, forced to pay extortionate rents and fees.

“My own constituency of Cavan-Monaghan these two counties have the highest suicide rates in the country and this just shows you the lack of services and hope for young people.

“I think the green party are the party that are planning for the future. In this manifesto we talk about free public transport for students, more mental health services, lowering education fees, giving young people a real chance  and are willing to tackle the climate crisis and the housing crisis also.”

Sean McCabe added: “The climate crisis for farmers is a livelihood crisis and we have to acknowledge that, we can put aside the idea that somehow rural Ireland and farming and the community that depends on it will do worse at climate action and instead start developing a plan to everyone’s benefit.

“With this manifesto and this election, if we can hold the dignity of people in rural communities in Ireland at the heart of our work everyone will benefit.”