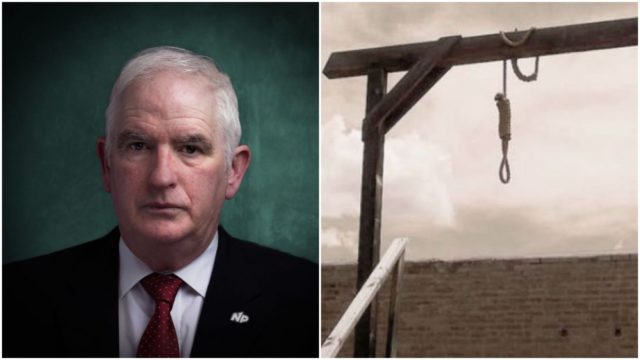 A General Election candidate from Laois has called for the re-introduction of the death penalty.

National Party candidate for Laois-Offaly John Daly, says that the punishment should be introduced for the most ‘heinous crimes’.

The Ballyfin native made the comments while speaking on a debate hosted by Will Faulkner on Midlands 103.

When asked by the host about the National Party’s manifesto which included bringing back the death penalty, Mr Daly said he feels, in light of recent crimes, there would be public support in a referendum.

Mr Daly said: “That would be for particularly heinous crimes. Murder etc.

“The state that crime has gone (into) I think it would be possible (to get a Referendum on the 21st amendment which abolished the death penalty).

“There is literally no regard for human life and there is willful murder on the scale of what is happening in Dublin.

“No too long ago, there was an incident where two Polish lads were stabbed. A lad came along and drove a screwdriver through their sculls – not once but twice and killed them stone dead.”

Capital punishment in the Republic of Ireland was abolished in statute law in 1990, having been abolished in 1964 for most offences including ordinary murder.

The last to be executed was Michael Manning, hanged for murder in 1954. All subsequent death sentences, the last handed down in 1985, were commuted by the President, on the advice of the Government, to terms of imprisonment of up to 40 years.

The Twenty-first Amendment of the constitution, passed by referendum in 2001, prohibits the reintroduction of the death penalty, even during a state of emergency or war.

Capital punishment is also forbidden by several human rights treaties to which the state is a party.

Mr Daly was joined on the debate by Fianna Fail’s Pauline Flanagan, Renua’s Noel O’Rourke and Fine Gael’s Gabrielle McFadden – the latter of whom is running in Longford-Westmeath.

They all disagreed with Mr Daly’s comments with Ms McFadden calling them ‘barbaric’.

She said: “I can’t sit here beside someone who actually thinks the death penalty should be brought back into this country.

“That is the most barbaric thing I have heard in a long time.

“I was reared in a house where my mother said that two wrongs do not make a right. Bringing the death penalty back into this country is outrageous.

“I can’t imagine that anyone would vote for that. We are in 2020 now and that is like something you would see in Donald Triump’s country.

“That is not the Ireland that I come from.”