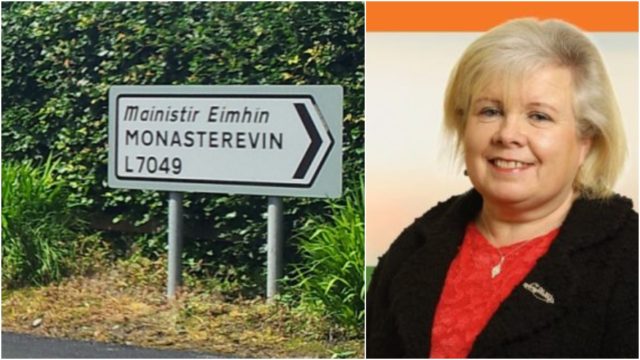 A Sinn Féin candidate in the Kildare South constituency, which now takes in Portarlington, Killenard and Ballybrittas, has gone overseas on holidays at a critical stage in the 2020 General Election campaign.

Cllr Patricia Ryan is contesting her second General Election for Sinn Féin, following a strong performance in 2016 when she got over 4,200 first preference votes and finished fifth, a hugely impressive performance given that the town of Monasterevin where she lives was then in the Laois constituency, as was her native Ballybrittas.

On this occasion also, it is expected she’d be able to tap into the Sinn Féin support in Portarlington which has been evident in the last two Local Elections when Aidan Mullins got huge support.

She was only elected to Kildare County Council for the first time in last May’s local elections.

The Monasterevin-based candidate is understood to have gone on vacation due to a long standing holiday which had been booked before the election date was called.

Cllr Ryan was as láthair and marked absent at a well-attended public meeting and pre-election meet-the-candidates hustings in Monasterevin on Friday evening. All ten other candidates were in attendance.

It is also understood that she sent her apologies for being unable to attend a similar meeting Newbridge tonight (Monday) while she missed a KFM debate last week. She is due back before the weekend.

“Our understanding is that she received a short holiday as a Christmas gift from her kids and the dates couldn’t be changed at short notice once the general election was called,” said a Sinn Féin spokesperson was asked for a comment.

Nevertheless, Cllr Ryan is thought to be in the running to possibly win a seat for Sinn Féin in the highly competitive Kildare South constituency, particularly given the party’s surge in the opinion polls, most recently ranked them in joint first place, tied on 24% with Fianna Fáil.

That poll put the Greens at 7%; Labour at 5% and Independents at 12% with the Social Democrats on 3%.

Based on this poll Cllr Patricia Ryan would be in contention to win a seat in the hotly contested Kildare-South 4-seater. With the outgoing Ceann Comhairle, Seán O’ Fearghail automatically returned to the new Dáil, Kildare South is de facto a three-seater.

Nationally, pundits are predicting Sinn Féin gains across the country in constituencies where they are contesting and poised to make electoral gains.

The last seat in Kildare South is fiercely contested between Labour, Sinn Féin, Independents, and even Fianna Fáil who have it targeted as a potential gain.

In the 2016 general election Cllr Mark Wall (Labour) from Athy and Patricia Ryan (SF) from Monasterevin both were in contention and narrowly lost out for a final seat in the then Kildare 3-seater. They polled almost an identical amount of first preference votes 4,277 and 4,267 respectively – virtually tied on 11.6%.

In last summer’s local elections Patricia Ryan won a seat on KIldare County Council taking the 5th seat in the Kildare Municipal District with 680 first preferences, 9% of the vote.

In the neighbouring Athy electoral area Cllr Mark Wall and his colleague Cllr Aoife Breslin were comfortably returned when there combined vote totalled 4,515, a massive 42% of the vote.

Over 10,000 voters from the greater Portarlington area, including Patricia Ryan’s original home place of Ballybrittas have been transferred out of Laois into the Kildare South constituency on this occasion.

In the Sinn Féin profile of its candidates it states: “Originally from Ballybrittas, Co. Laois, Patricia has lived in Monasterevin for the past 16 years with her husband Michael. She has two adult sons.

This article was amended to add a comment from a Sinn Féin spokesperson in response to our request.