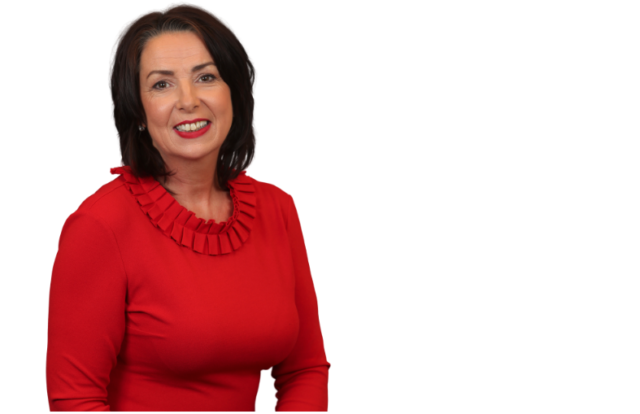 Pauline Flanagan, one of Fianna Fáil’s general election candidates in Laois/Offaly today and the only female candidate in Laois, has taken time out to answer questions about her reflections on her first ever canvass as a General Election candidate.

1 – Can you tell us a bit about yourself?

OK although I do think this election is not about me – it’s about what I can do for the people of Laois and Offaly.  I work as a lecturer in IT Carlow. I absolutely love the students. They teach me everyday as much as I teach them.

I am married to Gerry Flanagan – better known to most as ‘Flano’.  He works as a secondary school teacher in the CBS, Portlaoise.  He comes originally from Roscomroe in Offaly (near enough to Kinnity).

We have three children – Meghan aged 23.  She is doing an MA in NUIG at the minute and loves it. Frank is 22 and is in his final year of studying Mathematical Sciences (whatever that is!!) in UL.  A lot of you might know him from the GAA. He plays hurling with Laois and is a dual player with Porltaoise GAA.  We also have a 16-year-old son Paul. He is in transition year.

3 – Is there anything that has struck you in particular on the canvass trail?

Absolutely.  If I were to re-write the contents on my canvass card again, the absolute priority for me would be to tell people how much I will help the vulnerable, the elderly and the middle-income earners.

I have been literally blown away by the amount of parents I’ve met who have children with special needs, home-carers and people with disabilities who are not getting the services they need.

Millions is being pumped into the health and education system, but it’s not hitting the people that matter the most.  How dare this government treat our people like this?  Well let me be very clear here – ‘not on my watch’ would this continue.

4 – What are the main election issues for you in Laois/Offaly?

5 – If you could achieve one thing as a TD, what would it be?

Provide a better quality of life for families and business suffering financially and emotionally.

6 – What measures would you like to see put in place in the Midlands to help our environment?

This is a very important issue for all members of the Fianna Fáil party and it is important for all of us.

Policies from Fianna Fáil include tasking the Sustainable Energy Authority with giving low cost loans to homewoners and landlords to invest in green initiatives like retrofitting.

But I do believe that all measures need to have some ‘cop-on’.  For example, we must have a programme that puts families and business first – particularly those affected with Bord na Móna closures.

7 – What’s your view on the levels of poverty in the country and what measures can improve the situation?

This is a big issue for all of us.  I think the last government has focused too much on prosperity and not enough on taking care of the most vulnerable in society.  I believe in an Ireland for everyone.

8 – Name three things that could be done to improve the economy of rural villages and towns?

9 – Which parties or groups would you not deal with as part of a future coalition or power-sharing Government?

Sinn Féin.  I would ask all people to be VERY careful about what Sinn Féin are promising.  It is simply not feasible to make the billion euro promises they are making – this would ruin our country.

10 – What’s the best bit of political advice you’ve been given?

Deliver on what I promise.  Do what you say. And by God I will.