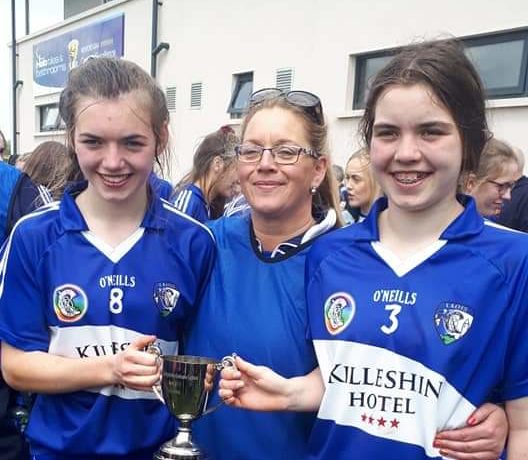 The Laois Camogie Volunteer of the Year for 2019 has been named as Laetitia Lyons Delaney.

Laetitia will receive her award at a ceremony held by the Camogie Association in Croke Park on Saturday February 15.

Laetitia recieved her nomination by her Club, Camross Camogie Club and the Laois Camogie would like to re-irterate everything they have said about her:

They said: “Laetitia is an integral part of our club on and off the field, she brings a very strong work ethic and enthusiasm to all she does and expects only the highest standards. She is a driven person and powers through an amount of work.

“She has been involved in Camogie all her life first as a player and now as a coach, mentor and promoter. She became involved initially as a parent and then progressed on as a selector with the u-12s and then as management, this led in time to management with u-12, u-14 u-16 and minor teams and this year as a selector with the Junior and Intermediate club teams creating history by winning both finals in the first year of this Junior competition.

“She is actively involved with the club serving on its committee where she embraces all the other aspects of running a club i.e. fundraising, catering etc.

“Laetitia has been involved with Laois Camogie for over four years, firstly with the u-14 development panel and she is now heading into her fourth year as Laois Development Officer for Laois Camogie.

“Laetitia is wholly committed to ensuring that the potential of every player is developed and that the conditions are put in place to allow all girls to improve their skill level.

“She is committed to club and county in equal measure and as part of the fixtures committee this year she has endeavored at all times to bring fairness and common sense in her approach to fixtures in the county.

“She is totally unselfish with her time and has shown that in trying to bring coaching courses and workshops to the county for the benefit of all clubs.

“She also plays a huge part on County Board Executive and Fixtures Committee and rarely misses a meeting, quite often coming straight from training with club or county.

“The Laois Camogie County Board Executive wishes to Congratulate Laetitia!