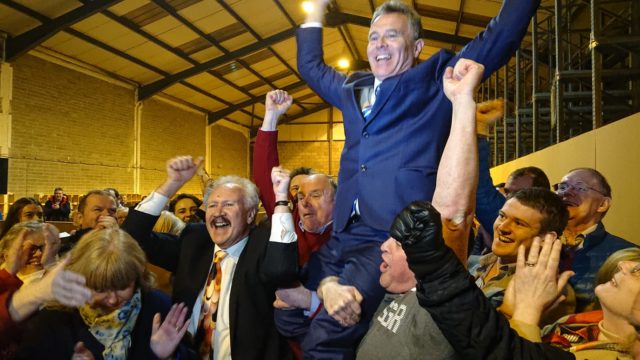 Seán Fleming believes that his party have no place in the next government following the results of the 2020 General Election.

The Fianna Fáil TD, who took the fifth seat after failing to reach the quota in the Laois-Offaly constituency, believes the people of Ireland do not want his party or Fine Gael to call the shots in the 33rd Dail.

He said: “I have a clear view on what comes next. Fianna Fáil and Fine Gael combined got 43% of the vote – everyone else got 57% of the vote.

“Fianna Fáil did not get a mandate, our votes are down and our seats are down. We got no mandate to go back to government. Or support government.”

And it is for that reason that Fleming believes Fianna Fáil should not support Sinn Féin in forming one.

“None of the two combinations out of those three make 80 on their own. Fianna Fáil and Sinn Féin … numerically it doesn’t even stack up.

“The straight forward answer to that question is Fianna Fáil got no mandate to either go into government or support a government. We got no a mandate – Fianna Fail and Fine Gael. The onus is on the others to form government not us.”

While disappointed with Fianna Fail’s vote nationally, Fleming was delighted that Laois-Offaly returned two TDs in himself and Barry Cowen.

“I think everybody was expecting a different performance than what happened, but it’s important in Laois-Offaly that we had 33% of the votes, Fianna Fáil, we were by far the biggest party.

“There are constituencies where we have lost seats, outright, and that is a very big disappointment. The entire Dublin commuter belt went heavily against us on this occasion.

Fleming believes one of the main reasons Fianna Fáil lost seats in those areas is because people are fed up with having to commute to work.

He said: “That is a message to the midlands as well, the entire commuter belt is tired of spending four hours a day in their car, to and from work in Dublin. And there is a reaction against that.

“Fortunately, Barry Cowen and I were strong enough to hold our 2 seats, but there is a lesson there, this commuting to Dublin is … ah it’s seriously up there.

“It didn’t come out as a single issue we analysed the results and there is actually a message there that people mightn’t have read yet.

“I’ve seen it at the last election and this election, unfortunately people who are working in certain offices in Dublin or could be nursing or whatever … they’re in uniform.

“They come home straight from work, in about half seven, go straight into their pajamas because why change into your house clothes when you’re going to bed in two hours and up at six in the morning to go again.

“When you’re knocking on doors and meeting people in their pajamas because its just commute, sleep, commute, sleep … that affects quality of life and family life and people express their frustration in that.”

SEE ALSO – Check out all the 2020 General Election on LaoisToday