Laois and Westmeath have played out many big battles over the years but the one that really brought the rivalry on to a new level was the famous 1995 minor saga, one that saw the counties meet three times in the Leinster final.

Football was in a different place then – Dublin and Meath were dominating Leinster at senior level and were two of the top teams in the country at the time.

For Laois and Westmeath to be squaring up in a minor final was even a bit novel in itself.

Laois very nearly didn’t get to the final at all. While they recorded big wins over Kilkenny and Carlow in the opening two rounds, they looked dead and buried in the semi-final in Navan against a Kildare side that had beaten Dublin in their previous outing.

As the game in Navan entered injury time, Laois trailed by four points and their season looked done and dusted.

But top scorer at the time was Ian Fitzgerald and he nailed a late penalty and an even later free to draw the game and send it to a replay.

Croke Park and Westmeath were next.

The Leinster final was a curtain raiser to the senior final between Dublin and Meath and again it looked to be gone beyond Laois as the game ticked towards its conclusion and they behind by three points.

But a pass across the square from sub Darren Bracken found Danny Doogue and he was foot-blocked as he went for goal. Referee Seamus McCormack awarded a penalty that Ian Fitzgerald duly fired to the back of the net at the Canal End ground of Croke Park.

Five days later the sides reconvened in O’Connor Park in Tullamore for the replay.

Such was the interest levels on that Friday night and the estimated 10,000 crowd that showed up, Gardai in Tullamore advised that the throw-in be delayed by 15 minutes.

While the first game in Croke Park was a cagey affair, this was an epic, one that was still level after extra time.

“This Leinster final between midland rivals has become the topic of conversation for the past three weeks,” said the opening line of the Leinster Express report which was beneath the fitting headline of ‘The Equaliser!’. 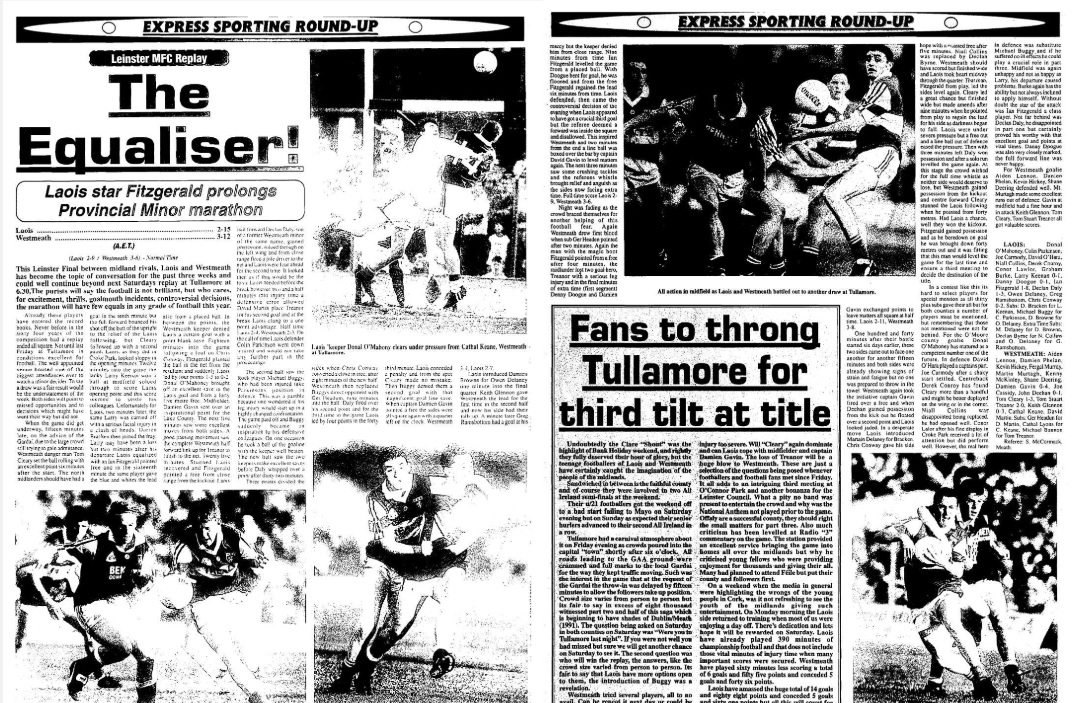 “The purists will say the football is not brilliant but who cares – for excitement, thrills, goalmouth incidents, controversial decisions, the marathon will have few equals in any grade of football this year.”

Laois raced into an early 1-3 to 0-2 lead with the goal coming from another Ian Fitzgerald penalty.

Tom Stuart-Treanor hit back for a goal for Westmeath and though the very impressive Declan Daly from Portlaoise got a goal for Laois, Treanor got a second for Westmeath. At half-time Laois led 2-4 to 2-3.

Thomas Cleary got Westmeath’s third goal from a penalty in the second half but Laois looked as if they had won it late on when Fitzgerald pointed a free to put them one up.

Moments later, Laois had a goal disallowed for square ball with Westmeath going down the field to level and send the game to extra time.

The drama continued in the two 15-minute periods of extra time.

This time Westmeath were the ones that led going into added on time but Ian Fitzgerald converted a free after being fouled himself meaning a third game would be needed. 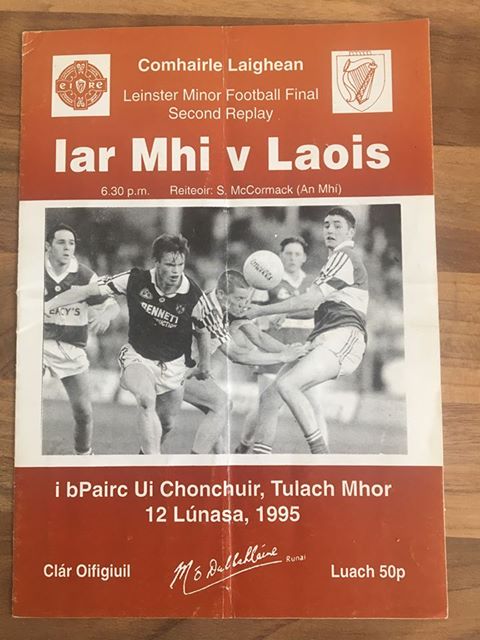 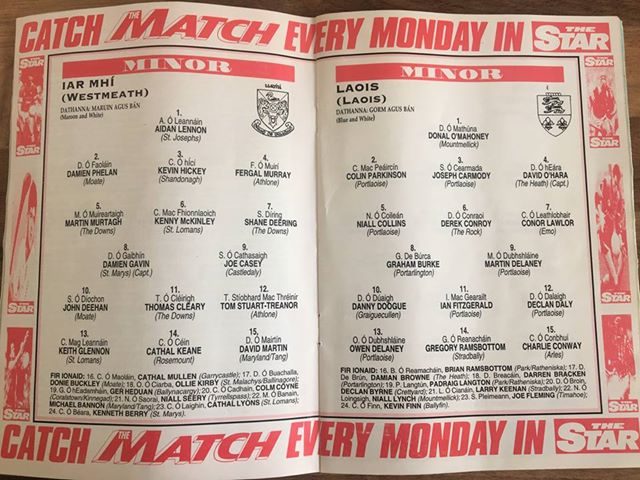 The following Saturday the Laois minors made the trip to Tullamore once again – for the fifth weekend out of six they were in championship action.

This time, Westmeath would “wear down Laois and claim title” according to the Leinster Express headline.

“The longest running Leinster MFC final in history concluded in a welter of excitement at sundrenched Tullamore on Saturday evening,” read the opening paragraph of the report.

“At the finish there could be no denying that the honours rested where they belonged. It’s poor consolation for the O’Moore boys at the end of three epic struggles that they contributed to the most exciting provincial final in any grade.”

Colm Parkinson missed the game because of sickness (though he did leave hospital to be at the game) while injury again denied Martin Delaney the opportunity to play.

On this occasion, Laois played into the strong breeze and despite taking an early 0-2 to 0-0 lead, Westmeath were 1-6 to 0-4 up at the break.

It was a deficit that Laois would fail to reel in in the second half.

This time Ian Fitzgerald finished with six points and was given a player of the championship award after the game.

Despite playing seven championship games, Laois didn’t even have a provincial title to show for their efforts.

For Laois, change seemed imminent. In the immediate aftermath it was suggested in the papers that Gabriel Lawlor was to step down as manager after three years in the role. Selector Brian Delaney was also said to be stepping aside.

But along with the other selector Ollie Phelan the three remained in charge for 1996. And what an inspired move that was.

Laois and Westmeath met in the Leinster semi-final in Croke Park in June 1996 and this time Laois had too much. The Westmeath side that played Laois contained only two of the All Ireland winners of ’95.

In contrast, seven of the 1995 Laois starters were still underage in 1996, including a fit-again Martin Delaney as captain and a couple of new faces that would go on to be big names – Noel Garvan, Kevin Fitzpatrick and 16-year-old Beano McDonald.

Laois would meet Dublin in the Leinster final, a game that again ended a draw and again require a replay in Tullamore.

The replay was won comfortably by Laois and from there it was on to an All Ireland semi-final against Donegal and then a glorious All Ireland final win over a Kerry side that included former Laois manager John Sugrue in midfield.

Westmeath and Laois would continue to dominate at U-21 level in Leinster.

In 1998, the group of players who were denied three years earlier went all the way to the All Ireland U-21 final but were beaten by Kerry in the Gaelic Grounds in Limerick.

Then in 1999 Laois and Westmeath met in the Leinster U-21 final. It again went to a replay – both games again in Tullamore – and Westmeath went on to beat Kerry in the All Ireland final.

The Laois-Westmeath rivalry continued at minor in 2000 when a Laois side containing Ross Munnelly were beaten after a replay in Croke Park. Westmeath went on to win Leinster that year.

Inevitably, the rivalry pushed on to senior. Laois won early-round Leinster championship games in 1998 and 1999 but Westmeath came out on top in 2000.

By 2004, they met in a unique Leinster final. Of the minor sides from nine years earlier, only Damian Gavin was involved with the Westmeath panel. A greater number of the Laois players came through – with Colm Parkinson, Ian Fitzgerald and Chris Conway all playing in 2004. Martin Delaney also made a brief cameo in ’04 having been involved that year after previously moving to the USA.

Unsurprisingly, the 2004 final ended a draw too – and again it was Westmeath that won the replay, meaning that their Leinster minor, U-21 and senior titles, in 1995, 1999 and 2004 all came after replayed final wins over Laois.

That glorious hot summer of 1995 seems a long time ago now but it was a series of games that really captured the imagination.

The next ten years would provide incredible joy for both counties; Leinster titles, high-profile Kerry managers, All Stars and unforgettable days out.

But they’ve since both slipped back to the relative obscurity from which they came, both of them dropping to Division 4 of the league in recent years before gaining ground and getting back to Division 2.

We’re unlikely to get the drama of 25 years ago this Saturday but Laois and Westmeath are two counties that share a rivalry and similar success story, one that started with the minors in 1995 and peaked in 2003 and 2004. Those years will never be forgotten in either county.

SEE ALSO –  LOOKING BACK: A point that never was from the Laois-Carlow battle in 1995 that will never be forgotten