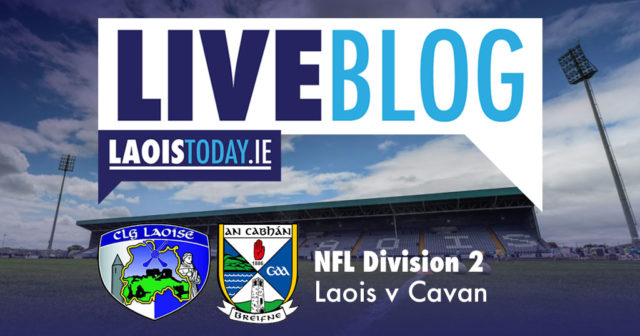 Storm Dennis is still raging out there but we are live as the Laois footballers take on Cavan in Round 3 of Division 2 of the National Football League.

After a seven day delay, the Laois senior footballers are set to face Cavan this afternoon in Round 3 of the National Football League.

This is the only Division 2 game on this weekend. Last weekend, Armagh recorded a 0-16 to 0-10 win over Kildare

Elsewhere, Roscommon defeated Clare while Westmeath had a good win at home to Fermanagh.

A win will leave Laois top of the table heading into the final four matches while a defeat will see them plummet to fourth from bottom with their opponents leapfrogging them.

The Laois team that is named is the same as the one that started against Westmeath two weeks ago.

It means that Trevor Collins, who started the opening round game v Roscommon and has been a regular since making his debut in 2017, starts on the bench again.

Kieran Lillis is again named at full-forward though he moved between there and midfield last week while Mark Barry, who is named at corner-forward, and Colm Murphy who is at centre-forward are likely to switch again, as they have done in the last two rounds.