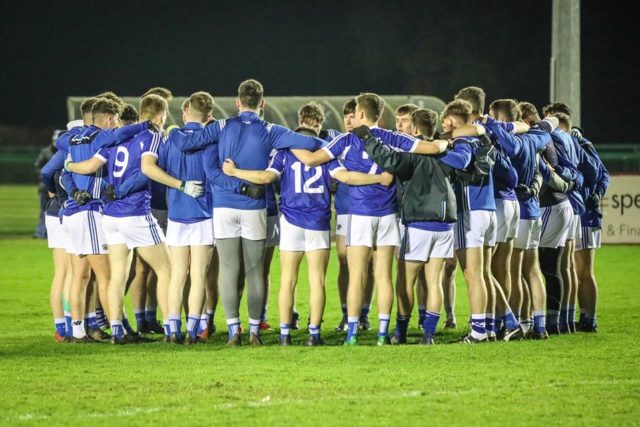 Laois and Westmeath footballers have a long and dramatic history of drawing with each other and they played out another chapter in O’Moore Park again this evening – but none more dramatic than this as it had to be settled on penalties.

The Laois U-20 footballers are through to the Leinster championship semi-final following a hard-earned win over Westmeath in tonight’s re-fixed clash in MW Hire O’Moore Park.

The sides were level throughout most of the game and in the end a first ever penalty shoot-out involving Laois was required.

The sides were due to meet on Saturday but a waterlogged pitch caused by Storm Dennis led to its postponement at the last minute and they reconvened this evening.

The lead up to the game had been dominated by the unavailability of senior players Mark Barry and Sean O’Flynn and though O’Flynn was out injured, Barry was a late addition to the panel and made a huge difference when introduced early in the second half.

Westmeath got the first two scores from Jack Murtagh and a free from TJ Cox but with the aid of the wind Laois found their rhythm.

Captain Ronan Coffey was central to most things Laois did and he kicked three first-half points with Emo’s Jack Owens landing two very impressive scores from play and Darragh Galvin pointing from an attacking mark.

Laois led 0-6 to 0-5 at the break but were hampered by a black card sin-binning for Coffey five minutes before the interval.

And just as he was coming back on early in the second half, Dean Brophy was heading in the other direction for an off the ball foul. In all it meant Laois spent 20 minutes in a row down to 14 men.

And they were dealt a further blow in the 45th minute when a long-range free off the ground from sub Kieran Colclough bounced wickedly in the square and squirmed over the line. Coupled with an earlier point from Jason Nugent, suddenly Westmeath were 1-6 to 0-6 up, a big lead on a wintery night.

But Laois kept battling on and a mark from Barry, another from wing back Jack Lacey and a fine free from Barry had the sides level.

Westmeath nudged ahead with a free from Tommy Ryan and two minutes into injury time it looked as if they might have done enough.

But a foul on Ronan Coffey gave Laois a free in front of goals and Matthew Byron came up from the goals to show nerves of steel to level things up.

That score sent us to two ten-minute periods of extra time with the score at 1-7 to 0-10.

Up in Mullingar last year, Laois began extra time with a goal and they almost repeated the trick here but Mark Barry’s effort was cleared off the line – however, the ball came back out to sub Sean O’Neill who gave Laois the lead.

The next significant action came seven minutes into the first half of extra time when Westmeath were reduced to 14 men after corner back Ciaran Daly was shown a black card for a foul on Ronan Coffey.

But despite their numerical disadvantage, Westmeath levelled the game again with a Tommy Ryan free after Gary Saunders was adjudged to have handled the ball on the ground – and the score remained 0-11 to 1-8 at half time in extra time.

Laois introduced Ross Bolger at half time in extra time and he made an instant impact as he was fouled and Mark Barry put Laois back ahead with a free.

Laois had the chance to double that lead when Jack Owens won a free but Mark Barry dropped it short and Westmeath went down the other end where Jonathan Lynam tied the game again.

TJ Cox and Jack Owens both had wides but neither side scored again and we headed for penalties with the score at 0-13 to 1-10.

Mark Barry, Ronan Coffey and Jack Owens all scored for Laois before keeper Matthew Byron missed to hand the initiative back to Westmeath.

But they missed their final two penalties as Damon Larkin scored Laois’s fifth to set up a semi final against Kildare in MW Hire O’Moore Park on Saturday.