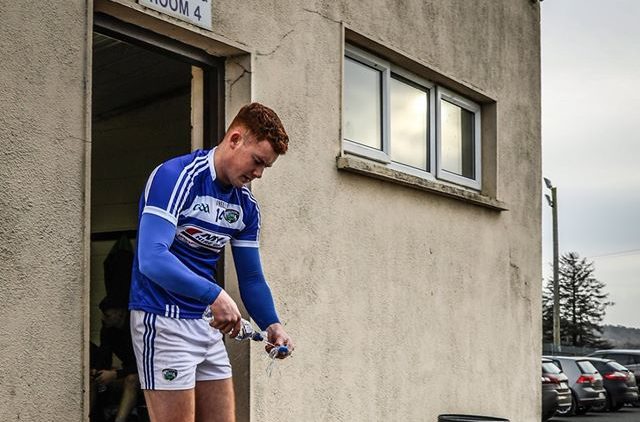 The Laois senior footballers returned to winning ways thanks to a very hard-earned win over Clare in Cusack Park in Ennis this afternoon.

Laois won by a point in the end, having been eight points up at one stage. But they had to endure a nervous closing stage as Clare missed a couple of late frees before seeing out six minutes of injury time to record a vital win.

After a ten-point loss at home to Cavan last Sunday, Laois’s win gives them a small bit of breathing space as they are now on five points, three ahead of both Clare and Fermanagh with three games remaining.

And they also stay in touch at the top, just one point behind leaders Cavan and Armagh who are on six.

The one obvious downside was the injury picked up by Cahir Healy in the first half, as the Portlaoise man made his first start in eight years. He’s on the way back from a cruciate knee injury and the last thing he wants is another setback.

Laois played with the breeze in the opening half and they never trailed after a fast start saw Evan O’Carroll kick three early points.

Gearoid O’Brien and Pearse Lillis – a cousin of Laois captain Kieran – pointed for Clare but Ross Munnelly and Colm Murphy responded for Laois before Murphy got a goal when he bundled the ball over the line after Stephen Murphy had saved O’Carroll’s initial effort.

The Clare keeper injured himself in the process and was replaced by Eamon Tubridy but Tubridy’s first kickout was cut out by Laois and Murphy pointed to put them seven up.

Munnelly then added a free after Murphy was fouled. Clare, through the experienced David Tubridy got the last two points of the half, but Laois took a 1-8 to 0-5 lead into the break.

Clare eat into that lead throughout the second half and though Laois went 25 minutes without a score – between an Eoin Lowry point in the 37th minute and two in a row from Munnelly in the 62nd, Laois looked to be safe enough as they led 1-11 to 0-9 late on.

But Cathal O’Connor clipped over a nice point from play and then Tubridy cracked home a penalty after footblock by Robbie Pigott on Joe McGann.

Goalkeeper Niall Corbet drilled over a ’45 but that was cancelled out by Eoin Cleary’s third.

But Clare then missed two late frees to make a draw of it and Laois just held on.