Seven days after the Laois senior footballers lost their unbeaten start to the National Football League at home to Cavan, they are back on the road this afternoon.

Mike Quirke’s men are heading West to take on Clare in Cusack Park in Ennis at 2pm.

A win would see them back in contention for promotion while defeat would leave them scrapping to avoid relegation with three games to play.

The Laois team that is named is the same as the one that started against Cavan last week.

It means that Mark Barry and Sean O’Flynn, who put in a serious shift on Friday night in the U-20 win over Kildare, are set to start again while there is once again no place for Graiguecullen’s Trevor Collins.

However, we would be very surprised if the 15 named below are the 15 that actually start come throw in.

This is the first meeting between Laois and Clare since the final day of the Peter Creedon reign back in 2017 when the Munster men hammered the O’Moore’s in Portlaoise.

Clare are actually going for three wins in a row against Laois as back in 2016 in Round 2 of the All-Ireland Qualifiers, they won 0-14 to 1-10 in Ennis.

Laois recorded a facile win in 2013 when Clare were managed by Mick O’Dwyer.

They have one win and two defeats from their opening three games and sit below Laois in the relegation places.

Clare lost to Roscommon and Westmeath either side of a surprise win over Jack O’Connor’s Kildare.

They don’t have Gary Brennan or Jamie Malone with them this year but still possess attackers like David Tubridy, Eoin Cleary and Keelan Sexton who have caused Laois plenty of problems in the past.

They, like Laois, will view this as a must win game if they are to avoid relegation to Division 3.

There was one game played in the Division last night which saw Cavan defeat Fermanagh by 2-11 to 1-11 to move top of the table. 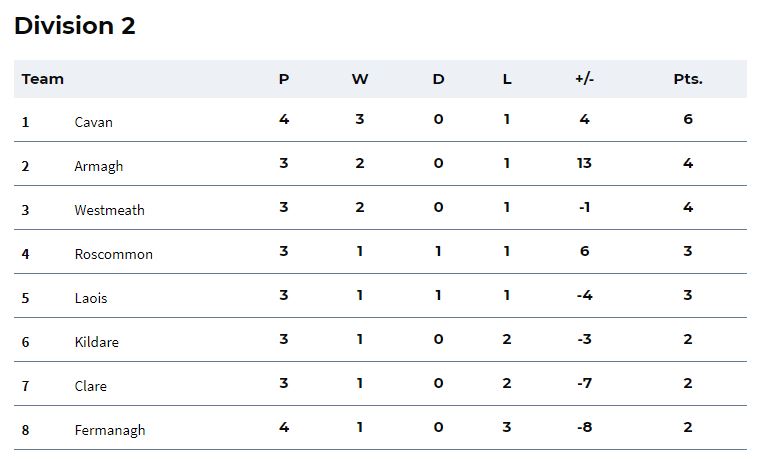 What is the Clare team?

Not much in this with Laois the slight favourites at Evens. Clare are 6/5 while the draw is 6/1.

Mayo’s Liam Devenney is the man in the middle. He hasn’t refereed Laois in recent years but he was in charge last year when he controversially sent off Oisin Hooney in Knockbeg College’s All-Ireland U-16 football final loss.

After Cavan’s win over Fermanagh last night, there are two other games down for decision this afternoon.

Westmeath and Armagh meet in Mullingar in a top of the table clash at 2pm while Kidlare host Roscommon at 2.30pm.