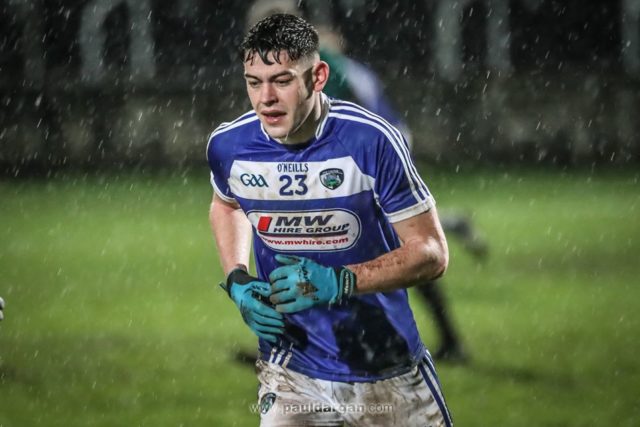 The availability of senior players to the Laois U-20 football panel was raised at the recent Laois GAA County Board meeting.

Laois are currently preparing for the Leinster final for the second year running, but controversy arose ahead of the first round game against Westmeath when senior players Mark Barry and Sean O’Flynn weren’t allowed to play and instead kept for the senior team’s Allianz Football League Division 2 clash against Cavan.

As it turned out the U-20 game, which was scheduled for a Saturday, was postponed because of an unplayable pitch and the players became available again for the re-fixed game on the Monday night after the senior game on Sunday.

Though O’Flynn was injured for the Westmeath U-20 fixture and Barry only came on as a sub, both started in the semi-final win over Kildare.

Laois GAA Football Board chairman Laurence Phelan told last week’s meeting that the two players are now “100% available” for the final against Dublin on Friday week, March 6. The Laois seniors have no game on that weekend.

But a proposal to last weekend’s Annual GAA Congress in Cavan called for U-20 players to be excluded from playing in the underage competition if they played senior league. That motion met with some resistance and was referred back to Central Council.

Stradbally delegate and former Laois footballer Eamon Delaney was among those who spoke against that at the Laois meeting.

“Are they trying to kill off U-20 altogether,” he asked.

“We (club delegates) were asked to ratify senior management at the start of the year but there was no mention of the manager not allowing players play championship,” he added.

“For some players, playing in a Leinster final at U-20 is the pinnacle of their career. The amount of success we have had at provincial underage level and this is a highlight for a good group of players.”

Portlaoise’s JP Cahillane suggested that the proposed rule should be the other way around – that players not be allowed play senior if they play U-20.

“A lad of 20 years of age if he’s good enough will have years ahead of him to play in the National League,” added JJ Conway from Arles-Kilcruise.

“They only have one or two years to play U-20. They should be allowed to play in their championship.”

Chairman Peter O’Neill pointed out that the National League, which is now linked to your championship status and could see Laois excluded from the All Ireland Qualifiers if they are relegated from Division 2, is now more important than ever.

Laois were one of the counties to vote against that change at last year’s special congress which sees the introduction of a new Tier 2 football championship this year.

“It was really unfortunate that the games came so close,” said Peter O’Neill. But our status in Division 2 is vital as if we drop out of Division 2, we could drop out of the All Ireland championship.

“We are told the U-20 is a developmental competition and if a fella is playing senior for the last two years he doesn’t need development.

“But we’re happy with how the way things happened and we all have all players for the Leinster final – and the U-20 manager knows that.”

Meanwhile, the U-20 final has been fixed for Netwatch Cullen Park in Carlow for Friday week, March 6.

And because of that fixture, Laois GAA have postponed the first of the €130 ticket County Board draws which was scheduled to take place that night. The first of the four monthly draws will now take place on Friday, March 13. All the other draws will remain on the same date.