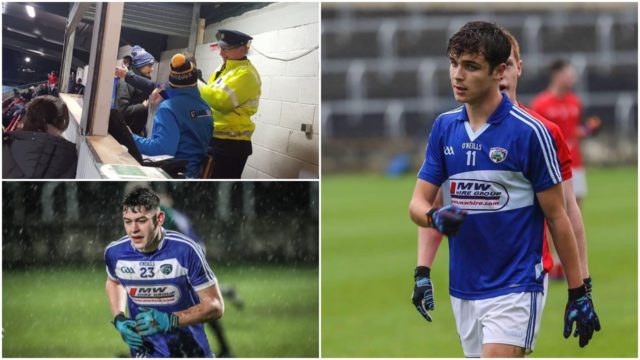 The Laois U-20 footballers saw their season ended by Dublin in Netwatch Cullen Park this evening.

Eddie Kinsella’s charges were beaten by 10 points in the end and here we take a look at some of the main talking points from the game:

The Laois captain kicked the first two scores of the game and maintained a very high level throughout.

He constantly looked for the ball and drove forward whenever he can. Gary Saunders was close enough behind him but Coffey gets the nod here and finished with four points.

The pair worked very hard but Dublin pushed up on the Laois kick-out in the first half and strangled it – scoring seven points in a row and the majority of them came from turning over the Laois kickout.

In fairness to both sides, they were incredibly accurate tonight. Dublin kicked just two wides while Laois finished with six.

However, in that six were two big goal chances that they missed in the final five minutes. Mark Barry dragged a penalty wide with five minutes to go and Alex Mohan missed shortly after. If either had gone in, it may have been closer.

These sides met in the Leinster U-17 three years ago and Dublin won by two points – but just two players who took part that night played here.

Ciaran Archer and sub Padraig Purcell were the only two Dubs to play in both wins. While ten of the Laois players who played in that semi final did the same in the final tonight.

The turnover from a Dublin perspective is insane.

Ciaran Archer has been heralded as one of Dublin’s biggest up and coming stars but Michael Dowling held him very well in Carlow tonight.

Archer kicked seven points but just two of them came from play as the Portlaoise man managed to keep him very quiet.

13 of Laois’s starting 15 are overage for this team next year and it will be interesting to see their progression in the coming years.

Sean O’Flynn and Mark Barry are already with the Laois seniors and it would be great to see the likes of Ronan Coffey and Gary Saunders drafted in to Mike Quirke’s set up now too.

7 – Trouble in the press box

There are two press boxes in Carlow – one in the stand and the other in the terrace. Steven Miller set himself up in the one on the stand side only to be told this was for radio only by a steward who insisted he, and a fella from Dublin GAA, must move.

Despite there being ample room for everyone, an almighty standoff ensued and the Gardai were summoned. The Dublin GAA official was moved but Steven was allowed to stay – after an intervention from Midlands 103s Jack Nolan and Crettyard Garda Bernard Graham. It was certainly an interesting start to the game!

Alan, late as usual, breezed into the press box after all the commotion and was treated to tea and chocolate by the great Tommy Murphy. And he was then gone when the aforementioned steward returned for Round 2 with Steven after the game!

Throw in to the game was delayed by 15 minutes after the Dublin bus got held up on the motorway following a crash.

If you ask us, this always seems to happen when Dublin play outside of Dublin. They simply can’t figure out how long it takes to get down the country!

There is no backdoor in this competition so Laois are out and Dublin march on to the All-Ireland semi final on St Patrick’s Day.

They will face the Ulster champions – either Tyrone or Donegal – in the last four.