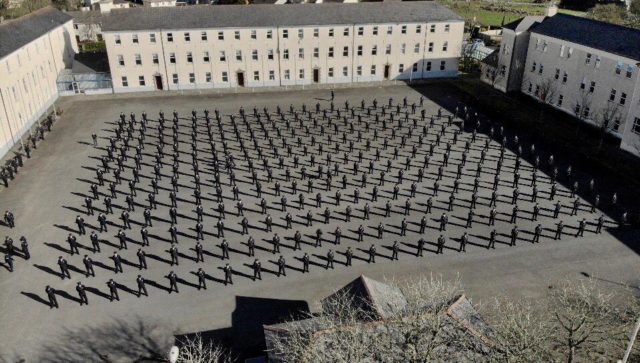 Last week, 319 new Gardai were sworn in to take the size of the force to the highest that it has ever been.

Following the attestation of 319 new Gardaí (195 from intake 193, and 124 from intake 201) in an Attestation Ceremony at the Garda Training College, Templemore, An Garda Síochána has grown to an organisation of 14,758, the largest number of sworn Gardaí in the history of the State.

The newly attested Gardaí are part of An Garda Síochána’s range of measures to maximise their operational availability and support other vital public services in responding to the evolving COVID-19 situation.

And 16 of those will be sent immediately to the Laois-Offaly Division.

There are 28 Garda Divisions in Ireland and Laois-Offaly has got one of the higher number of new gardai.

The Limerick (19) and Kildare (18) Divisions got the most with Kilkenny-Carlow and Cork City also getting 16 new gardai each.

“They will be on the streets assisting with their senior colleagues as the emergency requires,” said Minister for Justice and Laois-Offaly TD Charlie Flanagan earlier this week.

“The rosters have been changed to increase availabilty. Annual leave has been restricted and extra garda vehicles are already on the streets to the order of an extra 200 vehicles drafted in to assist the current fleet.”

In addition to the newly attested Gardaí, An Garda Síochána has implemented a number of prudent organisational changes across the organisation.

Some of these changes include amendments to rosters, restricted annual leave, delaying retirements where possible, hiring an additional 210 community support vehicles and the redeployment of personnel including 124 personnel from the Garda Training College, who have been redeployed across all four Regions.

Commissioner Harris has designated the ongoing situation as an “exceptional event” in accordance with the Working Time Agreement.

At this time there has been no change to the role of Special Tactics & Operations Command (STOC), Special Crime Operations and Detective/Drugs Units nationwide.

Whilst contingency planning is in place, these units continue to support the community and Garda colleagues with a range of specialist services.

Last week, Deputy Commissioner, Policing and Security John Twomey established the Garda National Co-ordination Unit. Headed by a Chief Superintendent, its role is to ensure a co-ordinated approach when dealing with organisational issues around the COVID-19 virus.

Deputy Commissioner Twomey chairs a daily meeting of this Unit via teleconference with the heads of the Garda organisation to discuss the latest issues arising from the COVID-19 situation and An Garda Síochána’s response to keep people safe.