This piece originally featured on LaoisToday on June 18, 2018, ahead of the Leinster final that year.

1985 was a particularly busy time for Laois supporters – with both the hurlers and footballers reaching the Leinster final.

Indeed Laois were represented in Croke Park on two Sundays running in July of that year – as the hurlers were beaten by Offaly before the footballers went down to Dublin, who were in the latter part of their famed rivalry with the great Kerry team of that era.

Laois reached that year’s final thanks to wins over Carlow and Meath – the Meath win in Tullamore a famous triumph for Laois over a sider under Sean Boylan’s management.

There was calls for Boylan to be removed from the Meath job after that game but he famously stayed on, won Leinster for the first time in 15 years in ’86 and then won All Irelands in ’87, ’88, ’96 and ’99 during a remarkable spell in charge.

Dublin won 0-10 to 0-4, but while the scoreline paints a grim picture, the Leinster Express was very impressed by the performance.

“Brilliant Laois let Dubs off the hook,” read the headline on Eddie Cassidy’s match report. “O’Moore defence in majestic form,” was the sub-heading.

“Laois footballers shrugged off the pundit’s lowly tag as no-hopers to produce a super-charged effort to make the holders battle all the way for their third title in a row.

“Until ten minutes from the end, the midlanders were still within a grasp of the elusive title that has escaped them for 39 years but after failing to score from play in the second half, Laois’s hopes collapsed and the inelegant champions Dublin survived to keep their crown intact with a spate of late scores.”

The Leinster Express reported that Barney Rock – father of current Dubs star Dean – was the big difference between the sides and that Laois’s 12 wides to Dublin’s seven was a big factor in the game. 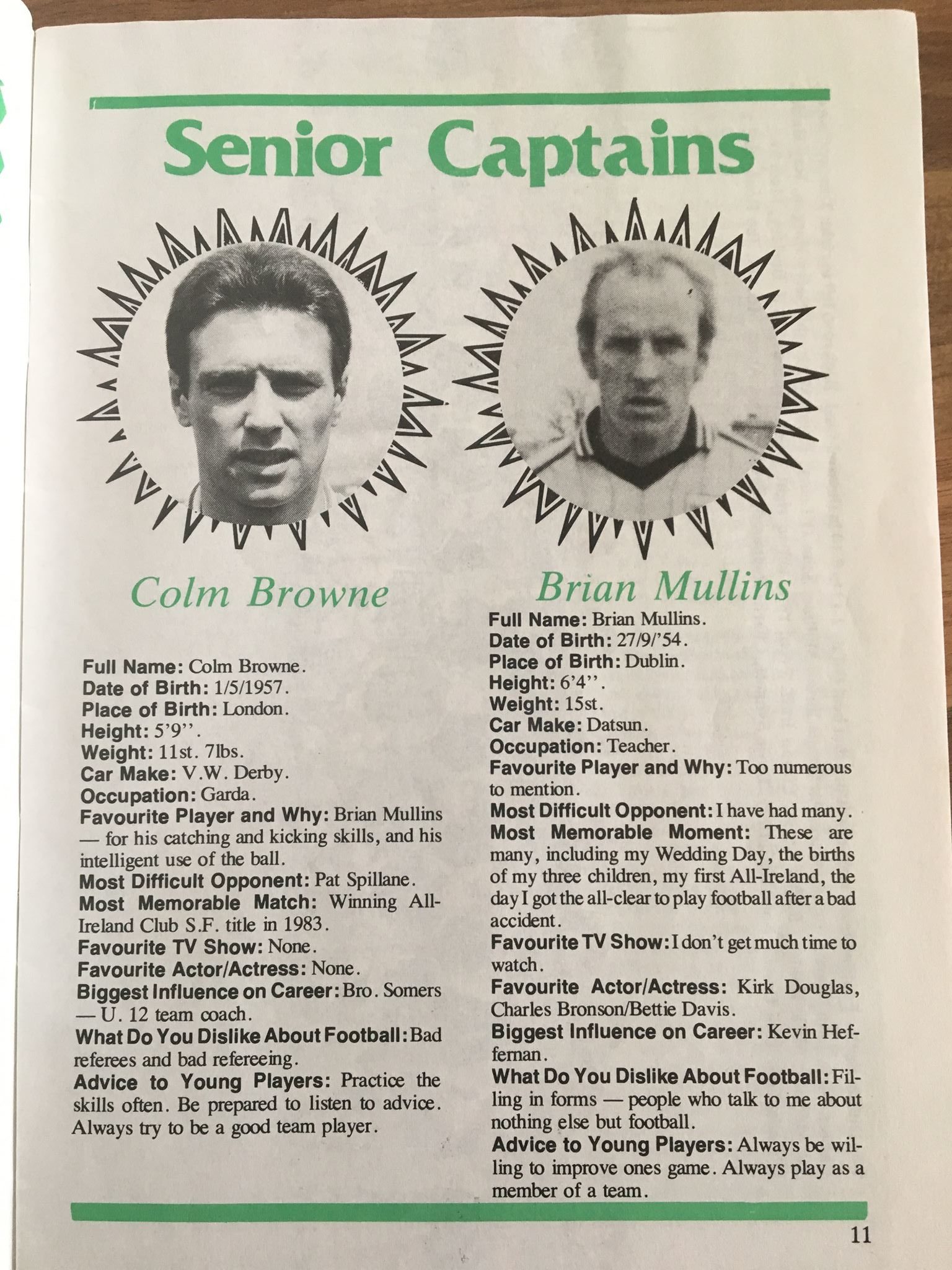 Laois were 0-4 to 0-3 down at half time and in a low-scoring second half, it was still only 0-6 to 0-4 with five minutes remaining. But Dublin kicked the last three points of the game to end Laois’s brave resistance.

While the result was disappointing one for Laois, the general mood was upbeat.

“Our defence was absolutely magnificent,” he added. “Kevin Heffernan (Dublin manager) told me after the game that were were the best defence Dublin played against since the 1970s. When you hear comments like that it shows just how good we were.

“We will be back next year, that I have no doubt.”

Brennan, who played in the 1968 Leinster final when Laois were beaten by Longford, put a plea out to all players in the county of the required standard to make themselves available for selection. 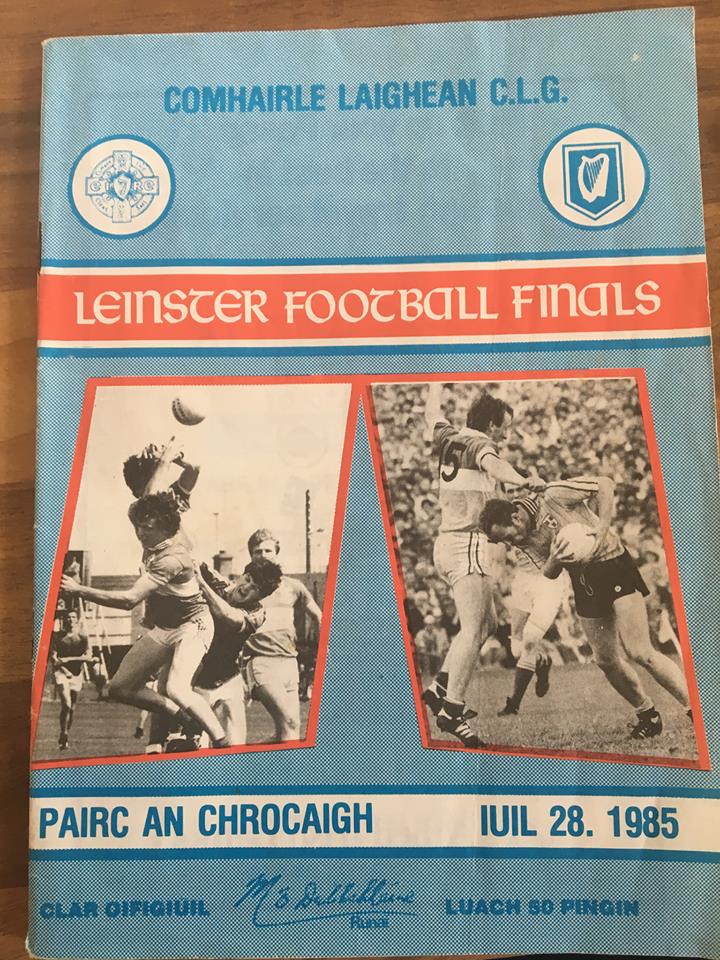 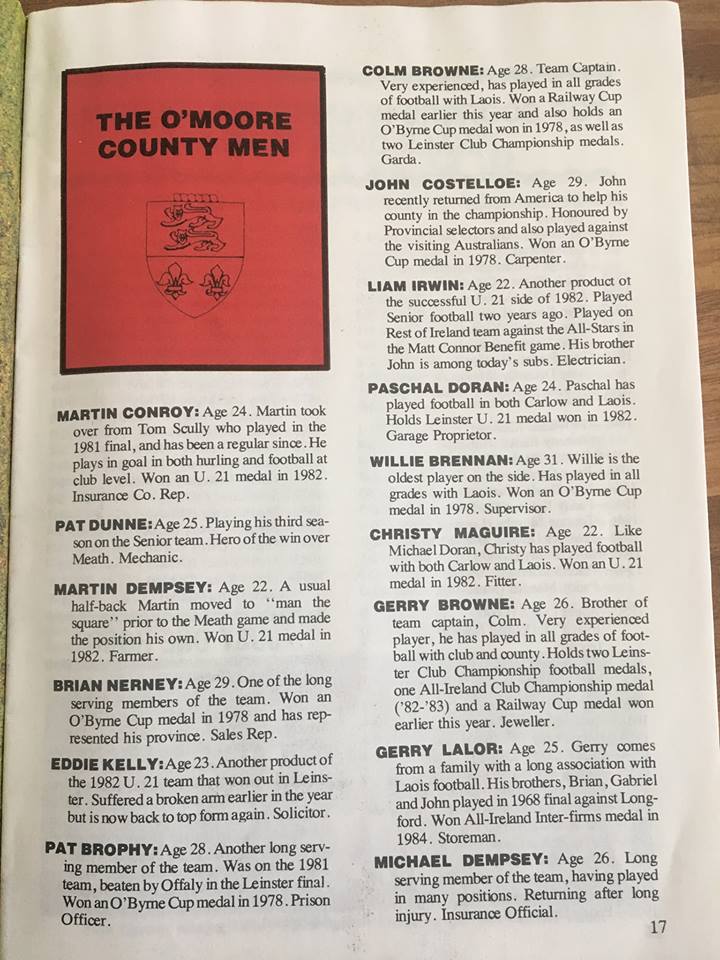 As it transpired Brennan was over Laois again in 1986 when they won the league title, beating Dublin along the way with a number of the ’85 team still involved.

A number of that team went on to be involved with Laois management team. Pat Brophy, who passed away this year, later managed the Laois U-21s while Eddie Kelly managed a Laois minor team to Leinster glory in 2007 and the Dempsey brothers – Michael and Sean – both had spells in charge of Laois.

Full-forward Ger Lawlor also served as a Laois selector and later managed club teams in Clare and Limerick, where he’s now based.