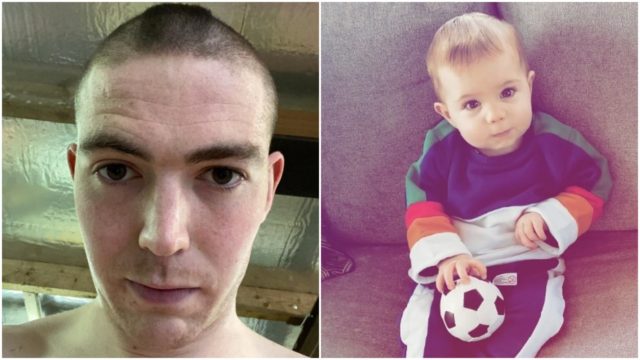 The Laois community is showing just how good they can be when they work together.

And the GAA community in particular is really coming to the fore in the efforts to get little Dan Donoher the life saving treatment that he needs.

Park-Ratheniska men’s and women’s teams raised more than €12,000 for their 400km run which took place on Easter Sunday.

While Colt-Shanahoe also completed a collective run over the weekend as they amassed a big total.

And now 11 more Laois GAA clubs plus the Laois senior hurlers are getting in on the fundraising act.

Over the next two weeks, members of the Laois senior hurling panel will either shave or dye their hair for Dan.

So far, Ballyfin’s Eanna Lyons and Portlaoise’s Frank Flanagan have had their head’s shaved.

They launched their GoFundMe page yesterday and already they are pushing close to the €3,000 mark.

Meanwhile, 11 GAA clubs have announced that they are going to run various distances in a bid to raise money for Dan.

Portlaoise men’s football, Ladies football, hurling and camogie wings are all coming together on Sunday the April 19 to walk/run 1000 kilometres in one day.

Portarlington footballers are going to run 300 kilometres Saturday April 25 and they have already raised just under €2,000.

Annanough GAA are coming together on Sunday April 26 to do a 300km in a day challenge. They say: “This is a community effort so we would like to ask all family members to get involved and join us in a 5 or 10Km Walk/Run.

“In order to respect the current guidelines we would encourage you to map out your 5 or 10km route within the 2km radius of your home. We would love if you could wear yellow for Dan on the 26th as this is his favourite colour.

“Please share any pictures of your training efforts and of course on the day itself, creative efforts are very welcome.”

Down the south of the county, Crettyard GAA have decided that all members and their families are going to come together on Saturday April 25 to walk/run 400 kilometres in one day.

Niall Donoher’s club Courtwood GAA have teamed up St Conleth’s Ladies and they will run 400 kilmetres between them on Sunday April 19.

While Timahoe Ladies, who are mam Aisling Donoher’s club, are doing “Pass the Baton to make Dan’s Treatment Happen” which began on Saturday.
They say: “Our Club members/supporters/players/families will collectively emulate the distance from Ireland to Boston Children’s hospital America, by completing collectively a relay distance of 4,754km. This is where Dan will receive his life saving treatment.

“Our club relay event started on Saturday for our families/supporters and will end on May bank holiday with our teams reaching the finish line on Monday May 4.”

This Sunday, members of St Joseph’s will be running or walking a total of 400 kilometres for Dan.

While Emo GAA and St Paul’s Ladies have also joined forces to run or walk 400 kilometres on Sunday April 19.

While, for the next six weeks, the Stradbally GAA footballers are running a ‘Bonus Ball’ competition. This will bring it at least €1,560 for Do It For Dan.

The reaction to the fundraiser has been huge with €652,000 raised so far from more than 18,000 different people.