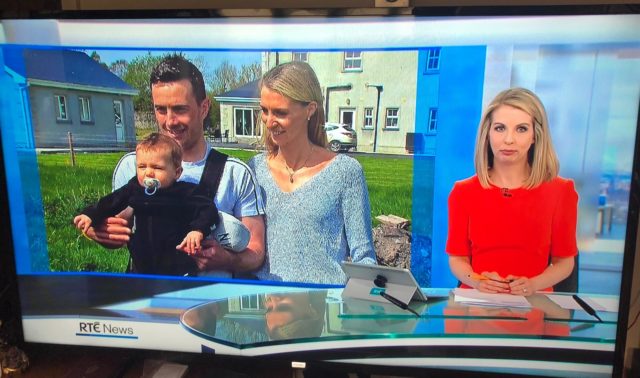 Dan, Niall, Aisling and Bobby, the dog, Donoher made a heart-warming appearance on RTE News this evening.

Mam Aisling and Dad Niall opened up on what it was like when they heard the news about their son and their hopes for the future.

Aisling said: “He met milestones until the three months of age mark. He would’ve been able to lift his head and lift his knees into the air.

“I know that Dan will always be in a wheelchair and that is fine but if he is still with us and he is still independently able to do things for himself while in the chair – that is absolutely perfect for us.

“We just want Dan to be able to go to school, be able to go out training with his dad and me, go to the farm – just to be a little boy. That’s why we’re doing this.”

A breakthrough treatment is available in the USA and to meet the cost, a target of €2.1million has been set.

The reaction to the fundraiser has been huge with more than €1.3 million raised so far from more thousands of different people.