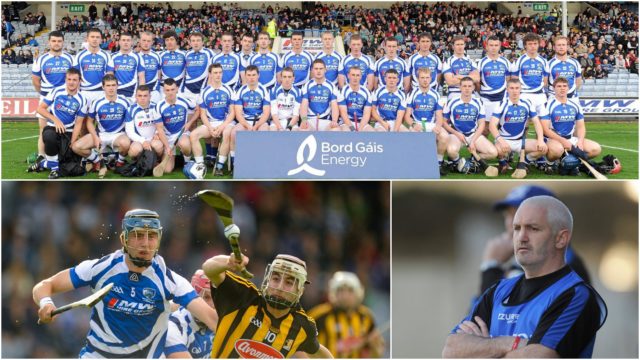 Championship final appearances have been few and far between for Laois hurling teams over the years but as the Laois seniors prepare for Sunday’s Joe McDonagh final in Croke Park against Westmeath, we look back at the Leinster U-21 decider in 2012, when Laois went down to Kilkenny.

It was Laois’s first appearance in the final since they’d gone down narrowly to Kilkenny in 1990 and they were seeking a first title since their only previous success in 1983.

Managed by Tony Doran, Laois reached the final thanks to a 2-15 to 0-17 win over  the reigning champions Dublin in the opening round, a win that came just days after Laois had been hammered by Dublin in the Leinster senior championship.

Goals from current senior Neil Foyle and an injury time effort from Castletown’s Brendan Reddin were the crucial scores.

Laois then beat Carlow by 0-15 to 0-14 in the semi-final in Dr Cullen Park, with Stephen ‘Picky’ Maher the top scorer with eight points.

Unfortunately for Laois they ran into a seriously talented Kilkenny side and the 4-24 to 1-13 scoreline in the final in O’Moore Park brought an end to their odyssey.

From the starting 15 of that side, Willie Dunphy, Stephen Maher and Neil Foyle were part of the Laois senior team in 2020 while Cha Dwyer and Ross King – then still minors – were both introduced as subs.

Kilkenny went on to lose that year’s All Ireland final to Clare but a number of their side have since become established senior players.

Indeed their forward line from that final of Kevin Kelly (a former Heywood student), Padraig Walsh, Cillian Buckley, Walter Walsh, John Power and Ger Alwyard shows the quality Kilkenny had to call on.

SEE ALSO – Laois Hurling Memories: All Ireland ‘B’ glory brings the curtain down on eventful 2002 season