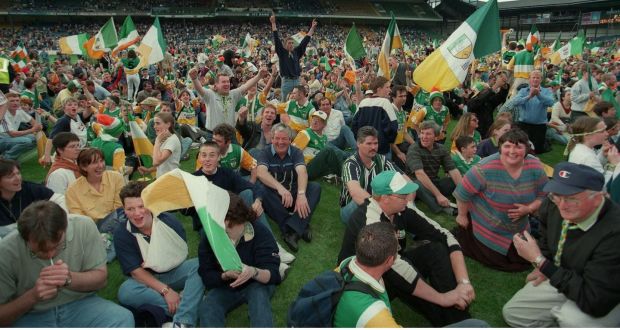 There were so many mad things that happened in the All Ireland hurling championship of 1998 that it takes a particularly crazy one to be the real standout moment.

But thousands of Offaly supporters staging a sit-down protest after their All Ireland semi-final replay against Clare in Croke Park as blown up early is one of the most unforgettable moments in GAA history.

Clare had beaten Offaly in the 1995 final and were a side adored and admired all over the country.

They won the All Ireland again in 1997 but by 1998 there was nowhere near the same level of love for them – particularly after a fairly heated Munster final replay win over Waterford that summer.

On the other side of the draw, Offaly were under Babs Keating, who had been over Laois the previous two seasons.

But Offaly and Babs never hit it off and he departed from the role after they lost the Leinster final to Kilkenny when he described the players as being like “sheep in a heap”.

Kilkenny incidentally only barely scraped past Laois in the Leinster semi-final, having trailed for most of the game before a Ken O’Shea goal got them over the line.

That season and particularly the Offaly sit-in was discussed in depth in the LaoisToday Down Memory Lane Podcast this week which focussed on the local, national and international events of 1998.

Among the guests on that Podcast were Will O’Callaghan of Newstalk and Midlands 103, who was part of that protest having travelled to the game with the Birr U-12 team that he was part of.

“(It was a) glorious triumph from them all just sitting on the field until they got what they wanted,” said presenter Steven Miller.

Will was one of the many young people on juvenile passes in the Nally Stand and while their mentors initially tried to keep them in the stand, they all eventually made their way on to the pitch too.

“At the Nally you had those very high and strange wiry fence parts and you had to climb over them or into the Hogan Stand to get out onto the pitch,” he recalled.

“So we were in the worst possible place.

“Eventually we broke through when it was clear everyone was going to go onto the pitch. We weren’t particularly well behaved.”

Will reckoned that many Clare people are now of the view that the GAA were “out to screw them” but that Ger Loughnane agreed to a re-fixture later that Saturday night and the sides met in Thurles seven days later when Offaly won before then beating Kilkenny in the final.

In doing so they became the first team to win the All Ireland through the back door.

“I have never met an Offaly person who doesn’t claim to have been sitting on the pitch that day,” laughed Steven.

“Offaly chairman Brendan Ward went up the steps of the Hogan Stand where they present the cup and said ‘we’ll fight this tooth and nail’.”

“I can say faithfully I was there and I was on the pitch that day,” said Will, who unsuccessfuly tried to claim there was “six minutes of normal time, four or five minutes of injury time” still to be played in that game.

“It was in the 68th minute,” said Niall Miller, who was one of the other guests on the Podcast.

“Clare were three points up and the Clare corner forward had the ball deep in Offaly territory.

“One vivid image I have is of Ger Loughnane holding two fingers up and saying ‘there’s two minutes left’. Everyone copped on to it from there.”

“The greatest tragedy of 1998 was that Laois and Offaly didn’t dominate the hurling summer,” said Brian Ramsbottom, the other guest.

“Laois had Kilkenny on the ropes, leading by three points with only a couple of minutes to go.

“If Laois could have played Offaly in the Leinster final that year, God knows what would have happened … Offaly were under Babs and were in trouble”.

The latest LaoisToday Down Memory Lane Podcast looks back on many of the main events of 1998, including Laois’s run to minor and U-21 All Ireland finals, the tragedy of the Omagh Bombing, Kildare’s All Ireland final appearance and the end of the classic TV shows Fr Ted and Blackboard Jungle.

SEE ALSO – Down Memory Lane – 1997: The start of the Bertie Era, the Diana tragedy and glory days again for Stradbally and the Laois minors