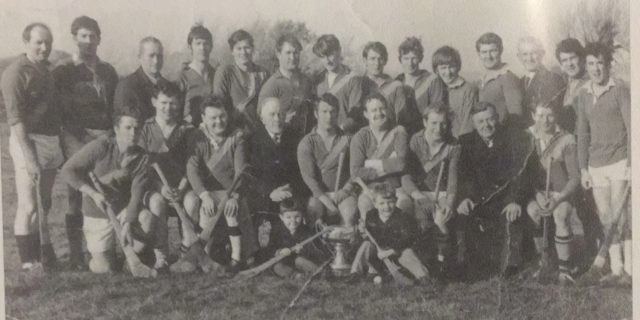 Coming into the 1970 season, the Clonad hurlers sat second in the Laois SHC roll of honour.

But over the previous decade a very strong force had arrived on the scene: Camross.

In 1970, however, they failed to get past the quarter-final.

Clonad had been champions in 1962 but their only final appearance in the meantime had been in ’67 when Camross had two goals to spare on them.

Their semi-final win over Rathdowney was shrouded in controversy with the game ending level but Clonad awarded the game in the boardroom. In any case they were back in the final.

On the other side of the draw, Clonaslee were making a name for themselves. They hadn’t been in a senior final since 1911, hadn’t won it since 1910 and had only won the intermediate title the previous year.

But they beat Cullohill in the opening round and then St Conleth’s (a combination side from around Portarlington) in the quarter-final.

They then beat Abbeyleix in the semi-final with The Nationalist newspaper saying “they were never in trouble” and played “delightful hurling”.

On the first Sunday in October then Clonaslee and Clonad squared up in a county final – almost as novel 50 years ago as it would be now.

In the end Clonad had three points to spare – but Clonaslee had a goal disallowed in the dying minutes that would have made a draw out of it.

“A final all out rally by Clonaslee should have brought them the equaliser,” read the report in the Nationalist the following week.

“Unfortunately the goal came after referee D Carroll had blown for a free, which was cleared, leaving Clonad the winners.

“To many, that score should have been allowed. Yet on the other hand many claimed the Clonad defence may have ‘eased off’ on hearing the whistle.

“Perhaps it was an unsatisfactory climax but none can deny that Clonad deserved to win.”

The performances of Peter Conroy “whose hurling was classic”, Paddy Ging, Ollie Fennell and Louis Conroy all merited special mention in the paper as did Dinny Roe and George Conroy who “played a real captain’s part”.

Matt Ryan would later move to live in Nenagh and many years later his son Donnacha would rise to prominence in rugby with Munster and Ireland.

Clonad would return to the final again the following year where they’d lose to Camross.

And the sides would meet again in 1975 when Clonaslee got their hands on the Bob O’Keeffe Cup. It remains their last senior title.