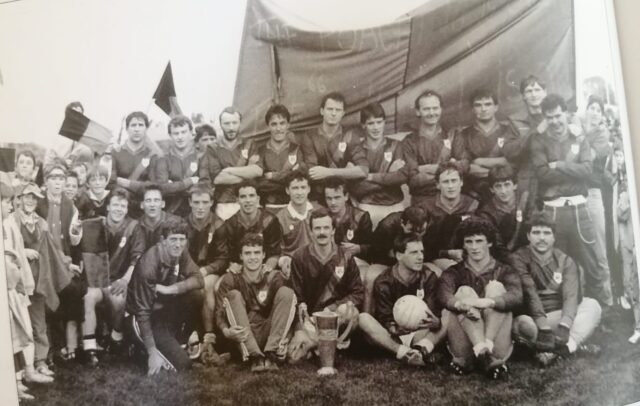 Portlaoise’s dominance of the Laois club football scene in the 1980s saw them win six titles in seven years from 1981 to 1987.

But in 1988, in a straight-knockout championship, they were dumped out in the first round when Portarlington beat them 0-11 to 1-7.

It was a result you could say that was coming. The sides had met in the semi-final the previous year when Portlaoise needed extra time and a replay to advance to a final where they’d easily beat Ballylinan for their fourth title in a row. They wouldn’t make it five, however.

Port were the coming team having gobbled up underage titles throughout the 1980s.

“Expectations became very high among the football fraternity of the town and indeed outside it, that a senior title could not be long delayed,” wrote club veterans Bill Bolton and Thatcher Coleman at the end of 1988 in a piece that appeared in the local media.

Port would then go and beat Ballyroan in the quarter-final and neighbours O’Dempsey’s in the semi-final to reach their first final in 25 years and seeking their first title since 1959.

On the other side of the draw, Timahoe enjoyed a particularly entertaining run to the final – beating Stradbally in the opening round, then needing three games to see off the 1987 finalists Ballylinan in the quarter-final before another local derby win over Annanough in the semi-final.

It meant they were back in the final for the first time in ten years and looking to add their second county final win, to their only previous success in 1969.

In an excellent pre-match preview in the Leinster Express, reporter Dermot Crowe – now of the Sunday Independent – covered off every conceivable angle.

“Can eager Timahoe stop Port’s gallop?” was the headline on Crowe’s main preview but over four pages he also had an interview with Portarlington stalwarts Laurie Lawlor as well as a large feature with Pat Butler, owner of Butler’s Engineering Ltd in Portarlington.

Ireland was rife with emigration in the 80s but Butler’s was a large employer and no fewer than five of the Portarlington team worked there.

Among the views he canvassed in Timahoe were then County Board chairman Sean Ramsbottom and then Timahoe secretary and future Laois GAA chairman Dick Miller, who had been on their team in 1969.

“Nobody gives us a ghost of a chance,” said Dick. “Sure they have it won long ago it would appear.”

As it turned out, Timahoe gave Portarlington as good as they got. A low-scoring final, Port had to contend with the sending off of the experienced Seamus Hunt only a couple of minutes into the game.

Padraig Culleton was later sent off for Timahoe. But Portarlington did just about enough, winning by 0-6 to 0-5.

Reflecting on the triumph, Portarlington midfielder Tommy Smith wrote a piece for a local publication at the time.

“Probably the most significant factor in our performance in the semi-final of 1987.

“Ironically it was only after this defeat at the hands of Portlaoise that we as a team realised that a county title was very much within our grasp.

“While recognising that Portlaoise were still a very special team, the myth of invincibility which had previously surrounded them was well and truly shattered.

“Following this match the players resolved that the championship which had eluded Portarlington since 1959 would return to the town the following year.

“In January ’88 Pacelli Donegan displayed the first signs of the leadership qualities which would earmark him as our captain for the coming year.

“He called the players together for a special meeting at which he suggested that we should train together once a week before training formally commenced in March.

“The unanimous vote in favour of the suggestion indicated that none of the players had forgotten the promise they had made one another four months previously.”

Having been managed by Offaly’s 1982 All Ireland winning captain Richie Connor in ’87, another of that team took charge in ’88 – Richie’s cousin Liam.

In his piece, Smith remembered the final as Portarlington’s poorest performace of the year but the scenes of celebration as unforgettable.

“On a day when strong winds destroyed any chance of good football, Portarlington were lucky to overcome by a single point a game Timahoe team who must surely have rued the many chances they missed, particularly in the second half.”

Smith singled out Dermot Murphy “who stood head and shoulders above us all and deservedly won ‘Man of the Match'”.

“Funnily enough my initial feeling when the final whistle went was one of disappointment at how poorly I personally had played.

“However this was soon forgotten when what appeared like the whole town of Portarlington erupted onto the field.

“I will never forget the feeling of pride experienced at seeing Pacelli Donegan accepting the cup from Bill Phelan.

“Only at this stage was it easy to see why teams like Portlaoise can motivate themselves to stay at the top for so long.

“The efforts to win a county final are great but they are easily outweighed by the feeling of personal achievement experienced and by the pride which such a win brings not only to a team but to a whole town as well.”

Portlaoise would return to beat Portarlington in the first round of the 1989 championship and again in the 1991 final.

Port would win the senior title again in 1995 and 2001 but that remains their last county final appearance.