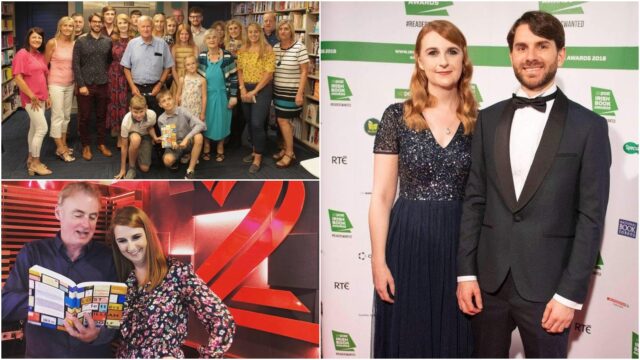 We love nothing more than a success story here in the LaoisToday office.

Portlaoise native and author Helen Cullen is just that.

Helen’s debut novel, The Lost Letters of William Woolf was published in 2018 by Penguin Random House in the UK, Ireland and in the USA by Harper Collins in 2019.

The novel garnered Helen a Best Newcomer nomination at the 2018 Irish Book Awards.

Her debut has also been optioned for television by Mainstreet Productions whose past successes include Downtown Abbey and Broadchurch.

As we look forward to the release of Helen’s second novel, The Truth Must Dazzle Gradually, we caught up with the author on growing up in Laois, Leaving Cert memories and her favourite words!

First of all, tell us a little bit about your background – growing up in Laois, your family, school etc?

I grew up in Portlaoise town and am the youngest of six, my elder siblings being Lynda, Mary, Frank Junior, Ger and Patricia.

I absolutely loved my primary school, Scoil Bhride, and was so thrilled to see my sixth class teacher, Mrs Wall-Coughlan, when I launched my first novel, The Lost Letters of William Woolf, at the Laois Leaves festival last year.

I attended the Brigidine Convent in Mountrath until Junior Cert. and then moved to Scoil Chríost Rí before transition year because I was tired of commuting every day and had so many friends in the convent too. 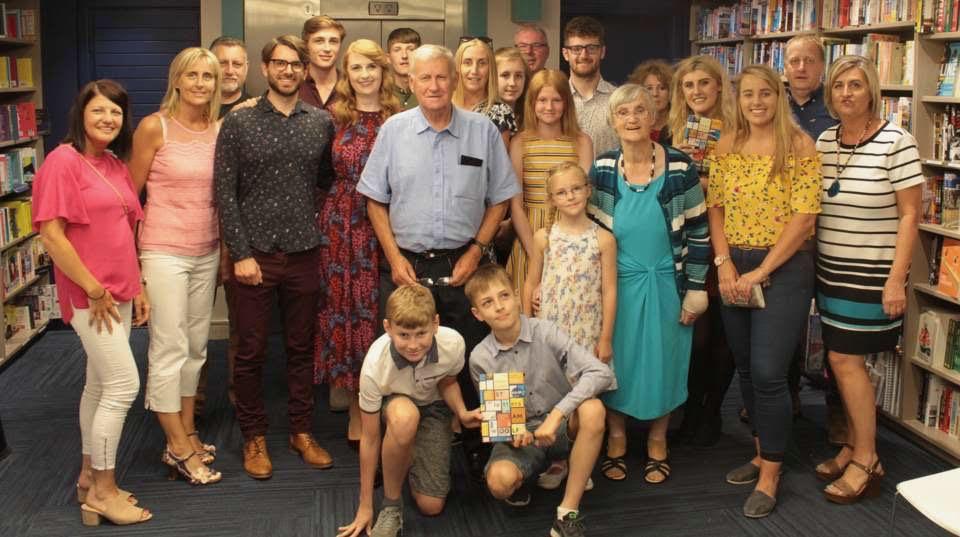 They say everyone has at least one book in them … did the written word always appeal to you?

I think the instinct that I wanted to try and write a book was present in me from my very beginnings; I don’t remember a time when I wasn’t dreaming of one day holding a book that I had written in my hands, but it wasn’t until my very late 20s that I really had the confidence to actually try and do it.

I was convinced that if it was something that I was meant to do that it would just be happening automatically, and that writers were born, not made.

I saw an advertisement for a six-month writing course that the University of East Anglia were running with The Guardian newspaper that mentored writers through the writing of their first draft and my partner Demian convinced me I should go for it.

I was drawn to the idea of the course because it offered some structure, a proper commitment with deadlines, and some guidance as I felt a bit at sea as to where to start.

As it happens, the very first thing I wrote seriously, for my first workshop critique, ended up being the first chapter of what is now The Lost Letters of William Woolf. 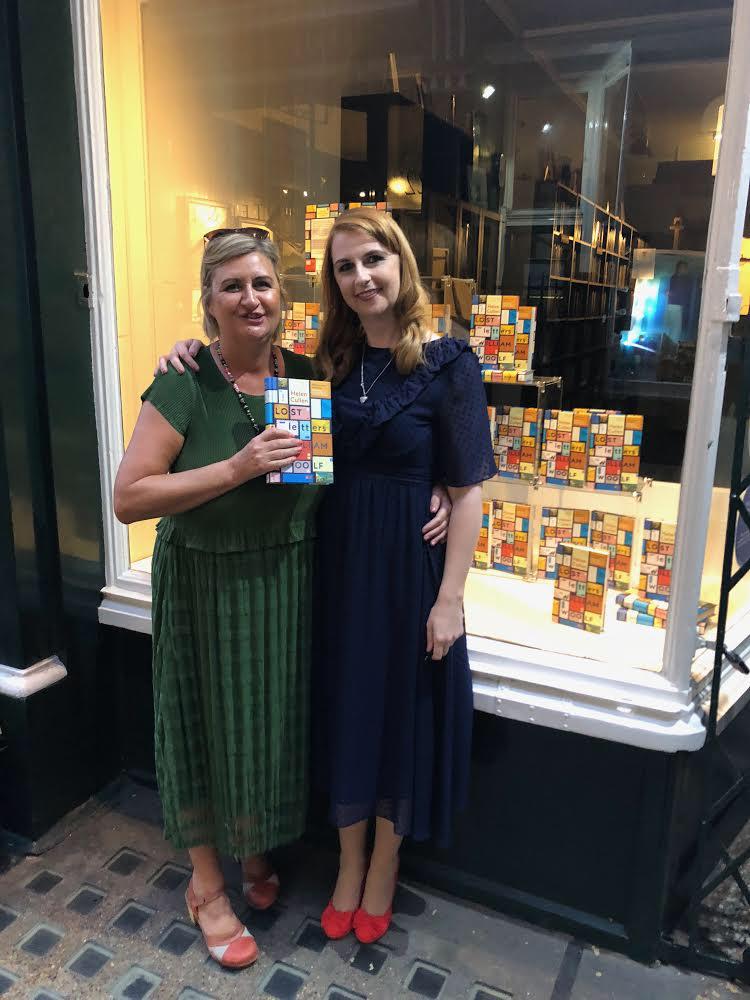 The experience for this year’s Leaving Certificate students is one nobody could have predicted … how do you remember yours?

As seems to be so often the case during the Leaving Certificate I remember the weather being absolutely glorious and the heaviness of my school uniform as I walked to the exam hall with the sun beating down.

I was nervous that I hadn’t done enough but the sense of relief when it was over was so palpable I can still feel it now.

I really feel for this year’s cohort, the students and teachers and all of their families, who have had to navigate such unprecedented events.

My sister, Patricia, is the Vice-Principal of Portlaoise College and I have been so impressed by how committed the school has been in prioritising the wellbeing and welfare of their students and ensuring that they do their very best by them during what was always going to be an imperfect situation.

Hearing about how they have sent missing you cards out to all of the students, and the effort that went into their virtual awards night and graduation ceremonies has been just so inspiring.

I wish all of this year’s students my very best and know they will all find their way even if the road is more circuitous than they may have expected – hopefully it will just mean even more great experiences in the long run.

Would it be fair to say that English may have been a subject close to your heart at school?

Absolutely! English was my favourite subject and my best result which I was so proud of as it was the subject I definitely devoted myself to most.

All of us remember certain quotes, lines or perhaps entire pieces of prose or poetry that we studied during that intense time (or maybe at a later stage) … would you have a stand out piece that comes to mind?

Yes, in fact, the epigraph of my debut novel came from a John Donne poem I read in Soundings: “More than kisses, letters mingle souls.”

What was your initial area of study at third level?

I studied for a B.A. Communications at DCU and then later an M.A. Theatre Studies at UCD.

Last year I also completed an M.A. in English Literature at Brunel University over here in London and I hope to commence a PhD in October at UEA.

You now write full-time but what other roles have you held along the way?

My first proper job was in RTE, working in the live music department and on some amazing 2FM programmes like the Gerry Ryan show, Dave Fanning show and with Larry Gogan.

I was absolutely devastated when Larry passed away earlier this year. 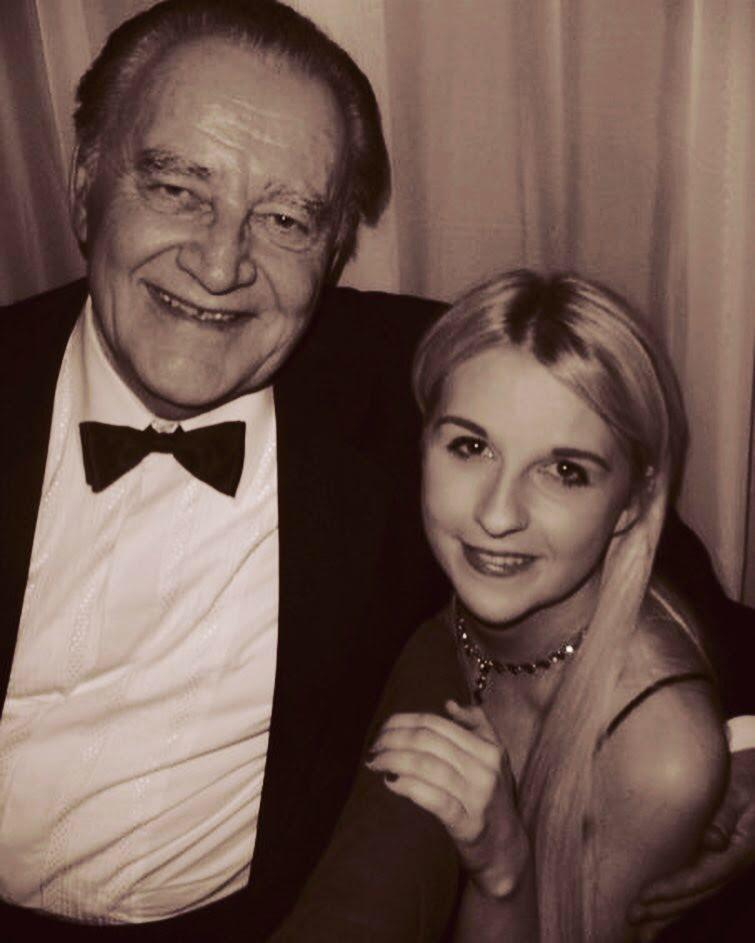 After I moved to London, I mostly worked in event production and my recent role was working in the marketing department for Google before I signed my publishing contract.

In addition to the novel writing, I do a little bit of freelance journalism now too – mostly for the Irish Times and the Sunday Times Magazine.

Is there any one person along your journey to being a published author that you feel gave you that belief or encouragement you may have needed?

I think I’ve been really blessed in my life to have people who have always encouraged me, beginning with my parents, Frank and Margaret.

As I mentioned though, my partner Demian supports me every day as I go through the process and I don’t know if I could persevere sometimes without him!

My writing mentor, Michèle Roberts, has also been invaluable by encouraging me to keep going and offering me guidance and practical criticism on the works in progress. 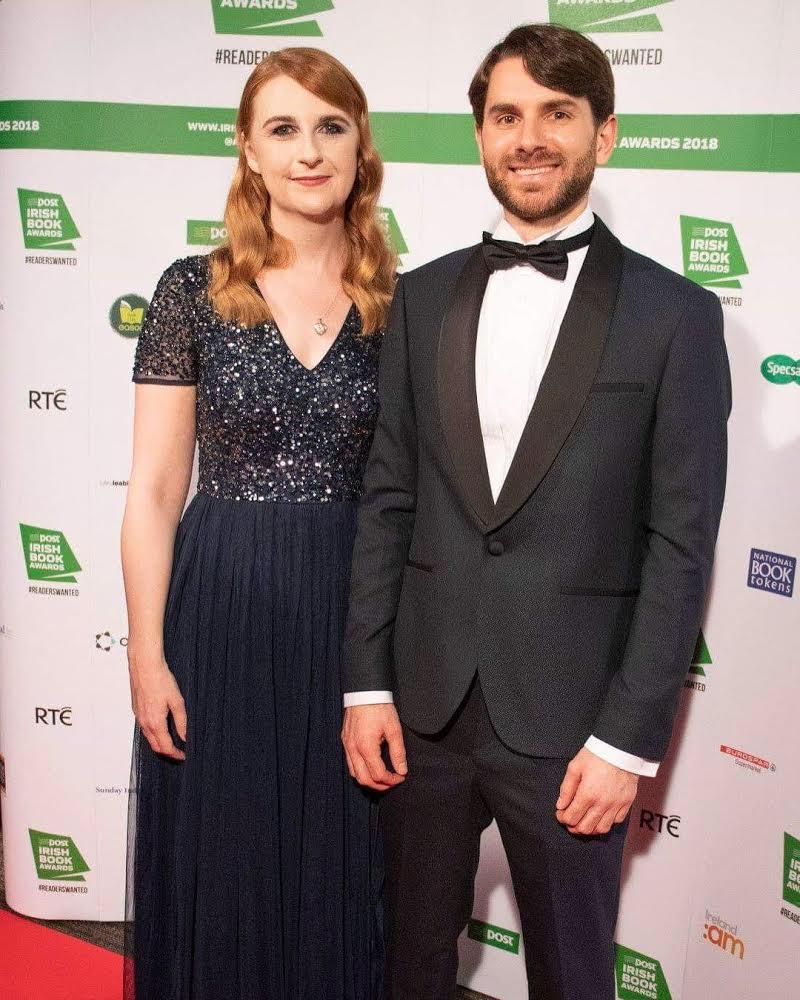 Have you a favourite word?!

Onomatopoeia – but I haven’t managed to use it in a book yet.

Do you ever find yourself recognising people you know, be it similar traits or that, in the characters that you write?

Not really – I’ve never recreated anyone deliberately but I’m sure some things are absorbed into my consciousness that are repurposed by my brain without me realising it.

Fiction writing is telling the truth about things that never happened.

Your debut novel, The Lost Letters of William Woolf reminds us beautifully of the act of letter writing … would you be one to pen a letter?

Yes, I think there are few things more exciting than receiving a handwritten letter – it is good for the soul of both the sender and the recipient. 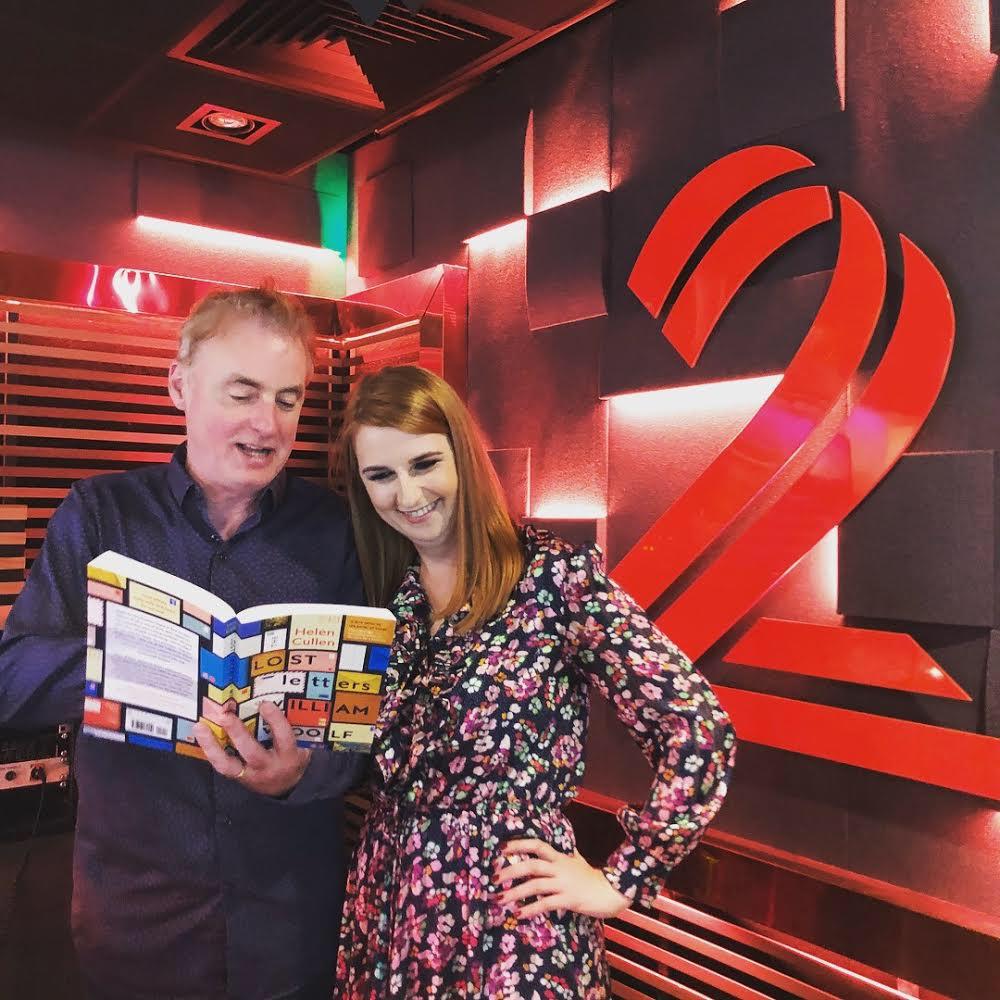 When you think of home and Laois, what images come to mind?

The big blue bridge that doesn’t exist anymore, the old library on Church St. in Portlaoise and the Rock of Dunamaise.

Inspiration: when writing your novels do you find yourself inspired to write or is the opposite true whereby the act of writing inspires you?

I think the latter – I believe creativity only happens when you create the opportunity for it.

Do you ever find writing difficult?

We’re looking forward to the release of your second novel in August … will there be a third?

It’s bubbling away at the moment so fingers crossed! 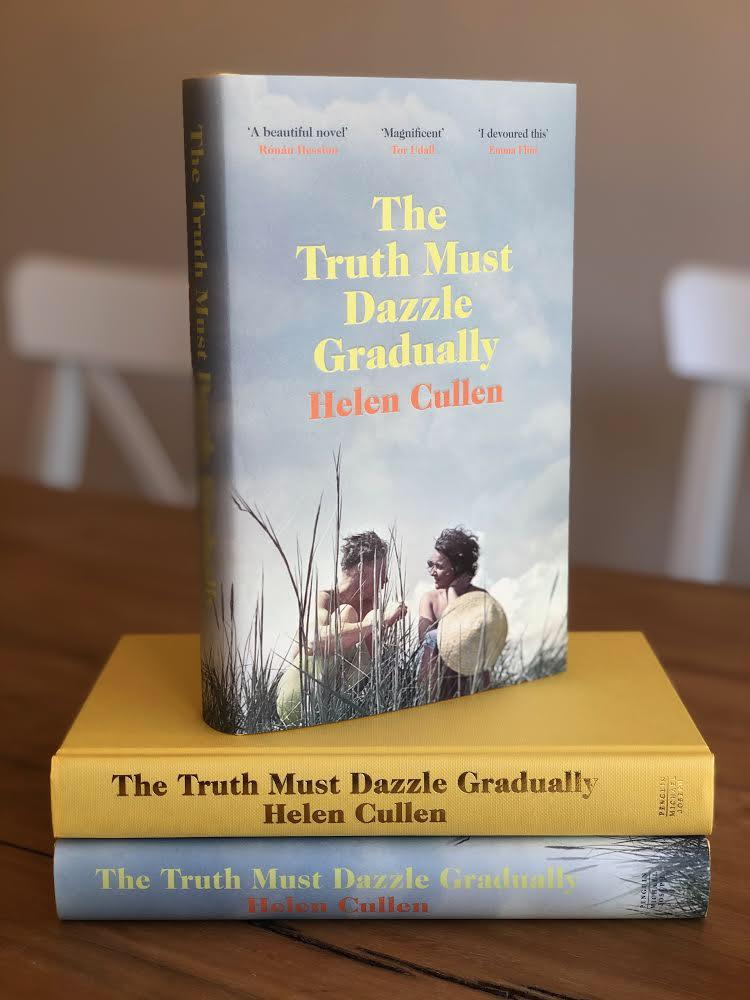 Helen’s second novel, The Truth Must Dazzle Gradually, will be published in August 2020.

On an island off the west coast of Ireland, the Moone family gather, only to be shattered by tragedy. Murtagh Moone is a potter and devoted husband to Maeve, an American actor struggling with her most challenging role yet as mother to their four children.

Now Murtagh must hold his family close as we bear witness to their story before that night. We return to the day Maeve and Murtagh meet, outside Trinity College in Dublin, and watch how one love story gives rise to another.

As the Moone children learn who their parents truly are, we journey onwards with them to a future that none of the Moones could predict. Except perhaps Maeve herself.

You can read more about Helen at www.helencullen.ie and find her on Twitter and Instagram as @wordsofhelen

Helen’s debut novel The Lost Letters of William Woolf is currently available from your local bookshop or to purchase online here.

The Truth Must Dazzle Gradually is available to pre-order here ahead of it’s August release date. Or contact your local bookshop.