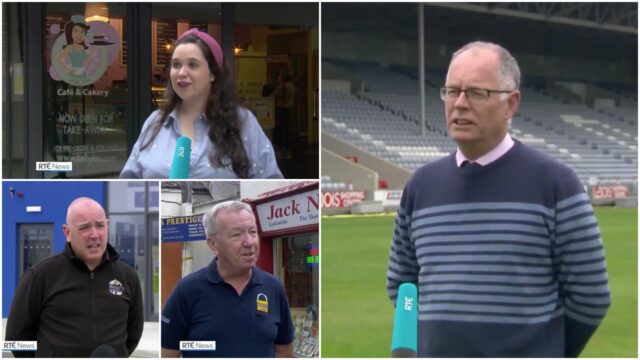 Three Laois business owners have opened up about how the absence of GAA since March due to Covid-19 has dealt them a huge financial blow.

Bosco Ramsbottom of Bosco’s Catering, Kelly Ging of Kelly Lou Cakes and Jack Nolan of Nolan’s Locksmiths all appeared on RTE News last night to speak about the issue.

The trio own separate businesses that are all intrinsically linked to GAA matches taking place in front of spectators.

With inter-county GAA not set to resume until mid October, these lost months have hit the aforementioned businesses hard.

Speaking to RTE’s Pauric Lodge, a Laois native himself, Bosco Ramsbottom explained how he has had to let some staff go.

He said: “Our contract is with Laois GAA to feed all of the inter-county teams here.

“So we have had to leave off some employees here until such time as the GAA season kicks off again.”

Kelly Lou Cakes, owned by Kelly Ging, is a cafe situated beside the stadium and she says they are missing the matches.

She said: “Usually we would have matches on a couple of days during the week and every weekend during the summer.

“We would have a huge footfall with people coming in for coffees and teas on a cold day to keep warm during the match while we do a lot of lunch options. But with no matches, all of that trade is gone too.”

While Jack Nolan, who also commentates for Midlands 103, explained how the regular call-outs for people losing car keys at matches are no more.

He said: “When you bring 20,000 people into town, people lose keys or when they are having the sambos and tea – they lock the keys into the boot. So we would be called on many times per day.”

Concluding the report, Laois GAA chairman Peter O’Neill explained the impact of the shutdown on the finances of his organisation.

You can watch the report in full below:

The absence of Championship action this summer has dealt an economic blow to many towns around the country@pauriclodge speaks to local businesses in Portlaoise to find out how they have been affected #RTEGAA pic.twitter.com/n8aGstKzEz