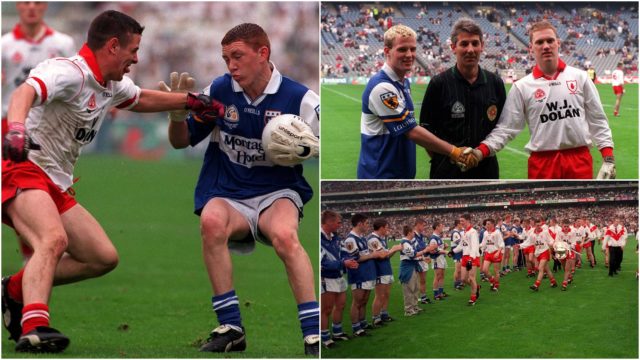 This piece originally featured on LaoisToday on All Ireland final Sunday in 2018, as Tyrone faced up to Dublin in Croke Park, 20 years after their breakthrough minor success against Laois.

This afternoon in Croke Park, Tyrone and Dublin will do battle for All Ireland senior honours with Dublin raging hot favourites to win their fourth title in a row.

Standing in their way of history is a Tyrone side under Mickey Harte, the manager who has guided the county to three All Ireland senior titles as well as U-21 and minor glory.

The Laois team included future Leinster senior winners like Padraig Clancy, Aidan Fennelly and, of course, Brian ‘Beano’ McDonald who was appearing in his third All Ireland minor final.

Brian McCormack, who also went on to play with the Laois seniors and is in search of 14th Laois SFC medal this year with Portlaoise, scored two points from wing-back

O’Dempsey’s Johnny Behan captained the side from midfield while the subs used included Damian Walsh, who would later go on to have a successful music career, and Graiguecullen’s Jamie Moran, who appeared on the TV3 Apprentice programme in 2010.

Laois had beaten Tyrone in the 1997 final but Tyrone were too strong on this occasion – winning 2-11 to 0-11 having been seven points up at half time.

Tyrone were coming off the back of a tragic spell, having lost team-mate Paul McGirr during the 1997 campaign and the 1998 final came less than two months after the Omagh Bombing.

Laois were highly lauded at the time for giving Tyrone a guard of honour off the field.

“Obviously the result is very disappointing,” said Laois manager Ollie Phelan, who was also the man in charge in 1997 and a selector in 1996.

“But we can have no complaints. Obviously on the day Tyrone were the better team and so they fully deserved their victory.

“Some of our lads didn’t play as well as they’re capable of but you can only play as well as you are allowed. Being seven points behind at half time was a major blow and unfortunately we missed a number of scoreable chances early in the second half.”

The Sportsfile photos from that day will bring memories flooding back for those involved.