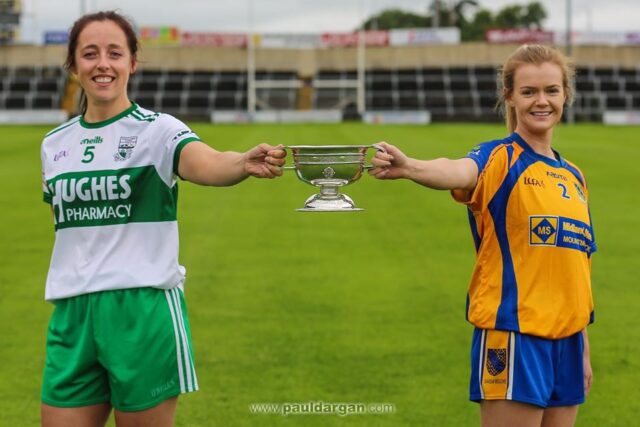 Portlaoise have beaten county champions Sarsfields in a cracking encounter in Rathleague this evening.

Sarsfields are seeking their eighth consecutive Laois Ladies senior football title in a row and this is certainly a huge win for Portlaoise to signal that they will seriously challenge them.

Despite being down at half-time, Portlaoise showed energy and determination to win by two points in the end – in an affair that swung from one direction to the the other throughout.

Portlaoise got off to a flyer as within two minutes, Sarah Ann Fitzgerald had the ball in the Sarsfields net as she broke the lines to finish well.

Sarsfields responded in the best way possible as Clare Conlon side-footed the ball into the bottom corner.

Kirsten Keenan got the first point of the game as she pointed after superb play by Shaunagh Jackson. Portlaoise were showing their quality in attack as they played the ball around well to create scoring chances.

Fitzgerald added to her goal soon after as she raised a white flag for the home side. Sarsfields would then take the initiative though as they rattled off four unanswered points.

Clare Conlon (free), Grainne Lalor, Joyce Dunne and Meaghan Dunne all pointed for Sarsfields to give them a two-point lead.

Both teams then exchanged scores as Grainne Moran pointed well with Conlon taking her tally to 1-2 with another free.

Conlon tapped over a free before half-time as Sarsfields went in at the break ahead by three points – 1-6 to 1-3.

Portlaoise came out all guns blazing in the second-half as they fired in 1-2 in quick succession.

Full-forward Aisling Kehoe pointed twice before Fiona Dooley caressed the ball into the net with the help of the left-hand post.

Sarsfields showed their champion spirit as they got back level with three points without reply. Conlon pointed three frees as both sides were in a great position to take the win.

With the game in the melting pot, Sarah Ann Fitzgerald took the game by the scruff of the neck as she rounded Becky Williams and tapped into an empty net. Fitzgerald pointed following the goal to put Portlaoise ahead by four points.

Once again, Sarsfields were able to show their character as they got the game back level with ten minutes to go. Conlon fired over another two frees with Laura Marie Maher also raising a white flag.

Substitute Leah Loughman would have the last laugh as she pointed a free as well as pointing from play as Portlaoise ran out two-point winners.

Portlaoise defended courageously for the last five minutes as Sarsfields looked for a goal to snatch the victory from the hands of Portlaoise.

The win puts Portlaoise in a great position after their win following victory over St Conleth’s in the first round of fixtures.

For Sarsfields it’s a stumbling block in what would be their eight county championship in succession.

Portlaoise are away to Timahoe on August 9 while Sarsfields are at home to St Brigid’s on the same day.