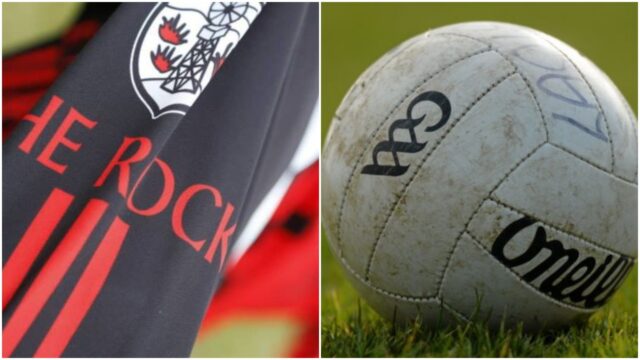 The Rock have their first win in this year’s championship after a stunning victory over Annanough in Mountmellick this evening.

Two goals in the first three minutes of the second half proved crucial as The Rock ran out eight-point winners in the end.

Annanough got off to a flyer and were three points to no score up after a few minutes. Damien McCaul and two superb scores from Killian Horgan and Elliott Scully put Annanough in the driving seat early on.

Horgan pointed again with Simon Shorthall following suit soon after as Annanough led 0-5 to 0-1 after 15 minutes. The Rock were denied again by Sean Hennessy as saved well from Sean O’Neil.

Hennessy picked up a nasty looking ankle injury following the effort and subsequently had to be replaced before being taken away in an ambulance.

Aaron Dowling pointed two frees as both sides still struggled to find their feet during the first 30 minutes. Annanough led by two points at the half-time whistle – 0-5 to 0-3.

The Rock came out all guns blazing in the second half and fired in two goals within three minutes.

Wesley Bergin finishing well for the first goal while Victor Oladapo played a superb one-two with McDonald to blast the ball beyond substitute keeper Conor Hanley.

John Scully got one back for Annanough before Dowling and McDonald put another two points on the board for The Rock. McCaul and Dowling swapped for frees before Dowling got another superb point from play.

With the second water break incoming, Killian Horgan was black carded for an off the ball challenge as The Rock now had a man advantage for 10 minutes.

McCaul slotted over another score before a massive melee saw Kieran Conroy receive a black card while Annanough substitute Robert Kinsella was shown a red card for his actions in the scuffle.

The Rock would go on to add another 1-2 to the score line as McDonald pointed well while Dowling pointed a free.

A sumptuous passage of play between Anavil Storey, Ben Pedro and Dowling set up the latter to round the goal and fire into an empty net.

McCaul fired back with a point from play but it was little too late as The Rock ran out eight point winners in the end.

The win means The Rock are safe from relegation while for Annanough their next game is now must win.