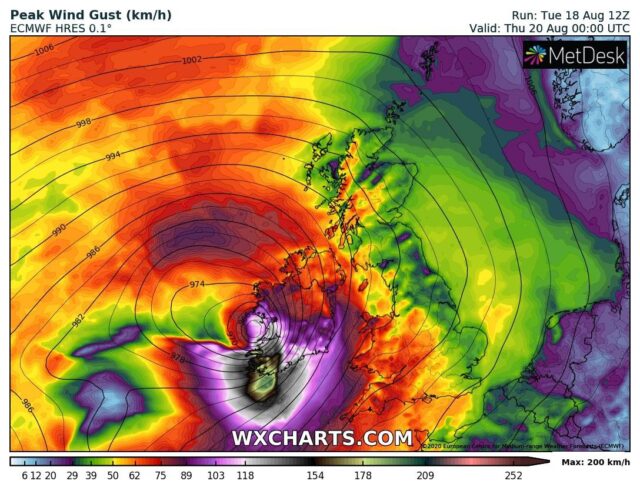 Ah yeah – as if things weren’t bad enough, why not throw in a storm in August as well.

Met Eireann have released a weather warning as Storm Ellen is set to batter Ireland this evening with severe gusts and driving rain.

Meanwhile, local forecaster Cathal Nolan says that this could be the worst storm since Hurricane Charlie in 1987.

He said: “Storm Ellen could well become the strongest and most economically costly storm to strike Ireland since Hurricane Charley struck Ireland in August of 1987.

“Severe winds of over 180-200 km/h are indicated on this evenings ECMWF weather model.”

Met Eireann say: “Storm Ellen will track over Ireland on Wednesday night and during Thursday bringing a period of severe and potentially damaging winds.

“Associated heavy rain will also bring a risk of flooding.

“Due to the combination of storm surge, spring tides and onshore winds there is a potential risk of coastal flooding.”

The European Centre for Medium-Range Weather Forecasts (ECMWF) is anticipating more than 100mm of rain over the coming days in parts of the west, midwest and south of the country.

Parts of west Cork which have already been badly affected by flooding are expected to experience more heavy rain in the coming days.

SEE ALSO – Coronavirus: One further death and 190 new cases as Laois has less than five again