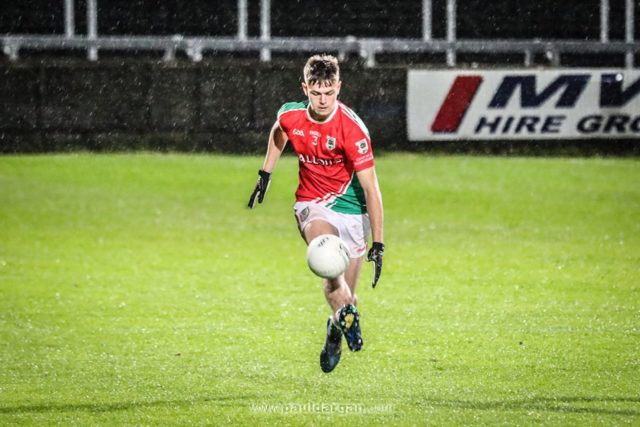 Mountmellick kicked 21 points but it wasn’t enough as Clonaslee proved to be a hard nut to crack in Annanough this evening.

It was two of their young guns, teenagers Bob Downey and Cian Barrett, who popped up with the vital goals as Clonaslee came back from the death to force extra time where they went on to win.

Conor Gorman’s men were five points down at one stage and still three in arrears with the game in second half injury time only for Cian Barrett’s goal to force extra time.

That knocked the stuffing out of Mountmellick as Clonaslee marched ahead in extra time only for the eventual losers to draw within one point again before falling agonizingly short of forcing a first ever penalty shoot-out in the Laois championships.

From the beginning of the first half both sides defences were on top which concluded in a cagey opening minutes.

The sides exchanged points throughout the half with Colm Coss, Niall Mullen and Mark Dowling on target for Mountmellick while points from Sean Dunne, John Rigney, Niall Corbett and Bob Downey allowed Clonaslee stay close to Mountmellick at the water break.

After the water break in the first half, Clonaslee had the game’s first goal chance.

They worked the ball meticulously up the field before finding Sean Dunne on the edge of the box. Dunne drove the ball towards the goal but Mountmellick goalkeeper Eoghan Keogh was on hand to make a wonderful save.

Clonaslee remained on top but kicked numerous wides to keep Mountmellick in the game.

Mountmellick finished the half the stronger with a superb long range point from Shane Dowling and a free from Niall Mullen to leave one point separating the sides at the break – Mountmellick 0-9 Clonaslee 0-8.

Mountmellick continued where they had left off in the first half after the interval as Niall Mullen scored four points in five minutes to see Mountmellick take a five point lead.

However, the game was turned on its head when referee Eric Ward awarded a penalty to Clonaslee after 38 minutes.

A high ball was played into the box towards Niall Corbett and as he challenged for it with keeper Eoghan Keogh, the Portarlington whistler spotted an infringement and spread his arms wide – much to the dismay of the Mountmellick players and management.

Bob Downey stepped up and calmly dispatched the ball into the corner of the net to leave two points in it.

Mountmellick weathered the storm after this as they kept the scoreboard ticking over with points from Colm Coss, David Kelly and Niall Mullen.

As we approached injury time, Mountmellick were three points clear of their rivals. Clonaslee threw everything at Mountmellick in search of a goal.

And they were rewarded late into injury time thanks to Cian Barrett. Clonaslee patiently worked the ball through the Mountmellick defence before Barrett found an opening and he smashed the ball into the corner of the net.

Clonaslee had numerous opportunities to win the game after the goal but Ward blew the full time whistle to bring the game to extra time – Clonaslee 2-11 Mountmellick 0-17.

Clonaslee had all the momentum going into the half and Niall Corbett took advantage of their dominance as he converted four frees to give his side a comprehensive lead at half time in extra time – 2-15 to 0-18.

But Mountmellick clawed their way back into the game to leave a nervy finish for Clonaslee.

Points from Bernard Rochford and Colm Coss put one point between the sides as we approached the final minutes of the game.

Substitute Curtis Lee had a late chance to force penalty kicks but Jack Owens got back to narrow the angle and force his shot out wide to clinch a vital win.

SEE ALSO – Check out all our Laois IFC coverage here