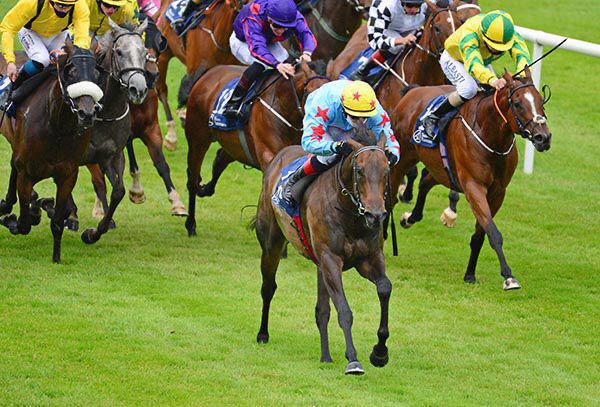 A Step Too Far came up trumps for her Laois trainer yesterday afternoon as she completed a hat-trick of wins.

Kieran Cotter’s mare galloped to victory in Bellewstown less than 24 hours after recording her second successive win at the same track.

This was the Portarlington based trainer’s seventh win of the season and the mare did it in some style too – winning the www.ratoathvets.ie Handicap with almost three lengths to spare over Teddy Boy.

A Step Too Far, saddled once again by Colin Keane, claimed the €6,000 first prize for owners Sinead and Dermot Dunne who are also from Portarlington.

Speaking to IrishRacing.com after the race, Cotter was delighted with the mare’s performance.

He said: “That’s a fantastic result for us. Job done as that’s what we set out to do.

“When we saw the two races here we said we’d go ‘bang bang’. She was in the Curragh last week and we sidestepped that to come here and it’s paid off well.

“For her she settled a bit today having had the run under her belt yesterday. She did the job well.

“She got 9lb for yesterday and the handicapper probably won’t miss her again but she’s improving.

“We’ll have a bit of fun with her, we’ll sit back now and see where we go. There is nothing immediately on the horizon and we’re under no pressure now.”

Check out video of the win below:

The Hill of Crockafotha is becoming a lucky place for us!