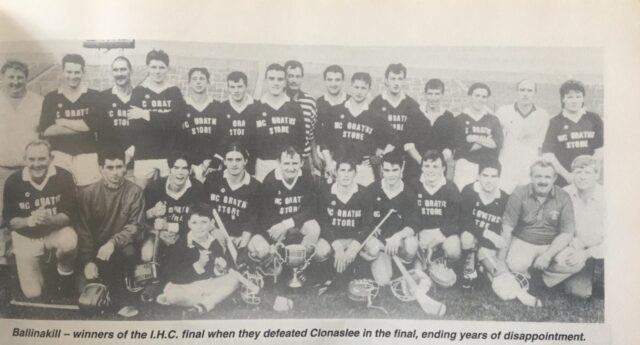 There are few clubs in Laois that have to beat down the door and endure as much heartbreak as much as Ballinakill.

In 1969 the club won the Laois Junior ‘A’ hurling title and the following year reached the intermediate final where they were only beaten by a point by Ballyfin.

That kick-started a run of four intermediate final defeats in succession as they lost to Colt in 1971, Ballacolla in 1972 and Cullahill in 1973 before finally making the breakthrough to senior in 1974 when they beat neighbours Durrow in the decider.

In 1979 they reached the senior final, only to lose to a Camross side claiming their fifth title in a row. But Ballinakill were relegated again in 1988 and their quest to return to senior was a long and painful one.

In 1989 they were knocked out in the opening round of the intermediate grade by Ballyfin but they returned in 1990 to reach the final, only to lose to Mountrath.

By September, though, they had shown their resilience again, reaching the final again following wins over Camross’s second team in the quarter-final after a replay and then over neighbours Ballypickas in the semi-final.

Clonaslee, after beating Portlaoise’s second team and Ballyfin, were waiting in the final.

Could Ballinakill end their “luckless” run, as the Nationalist newspaper put it? A sixth final loss in a row and the second in six months would be hard to take.

“Clonaslee to return to senior ranks,” was the headline in the Leinster Express as they previewed the game.

“Choosing between the sides is not easy,” they added in the preview, noting that “Ballinakill will have the support of most neutrals if only for their string of defeats on final day”.

On that Saturday afternoon in mid-September, though, Ballinakill claimed the previously elusive intermediate crown in serious style.

They had the game won at half time as they led 3-8 to 1-5 after a blistering performance in the opening half. The first half goals came from Tom Simms, Alan Walsh and Brian O’Shaughnessy Declan Rooney got Clonaslee’s goal but the Nationalist that “Clonaslee went in at half time a shattered side”.

Michael ‘Maggie’ Walsh, a hero of the great Laois teams in the 1980s and who’d been on the club’s team that won the junior title way back in 1969, was central to a lot of their good attacking play.

He finished with 1-7 and the Nationalist headline was a simple ‘Ah Maggie, you were magic” adding in the report that it was his “finest hour”, as he “inspired his younger team mates to a fantastic win in the Laois IHC final”.

“So much agony … now ecstacy,” was a headline on a shorter piece on the same page.

Incidentally Walsh, who was by then aged in his early 40s, wasn’t originally selected to play but started after Ken Brennan suffered an eye injury in training on the Thursday night before the game.

For Walsh and his team-mates Liam O’Shaughnessy, Peter Hamm and captain Michael Dunphy it was their second medal – all four had been on the 1974-winning team also.

While Walsh hinted in an interview with the Leinster Express afterwards that it was his last game, he was in goals eight years later when the club won a Junior ‘B’ championship.

He sadly passed away in 2017 at the age of 64 and is regarded as the club’s greatest ever player, having played for Leinster and was selected on the Laois hurling team of the milennium in 1999.

Clonaslee won the intermediate title in 1997 but their stay at the top grade was brief in their own right as they pursued senior glory under the Tinnahinch name alongside neighbours Rosenallis.

Ballinakill have been senior more or less ever since. They were relegated at the end of the 2013 season but won the second tier Senior ‘A’ grade in 2014.