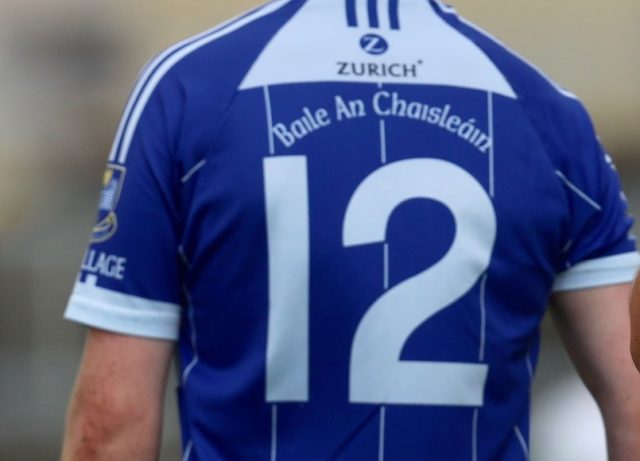 Castletown recovered from their first round defeat to Park-Ratheniska against The Harps today to keep their football championship hopes alive.

They must hope that Park-Rathensika also beat The Harps as there are two quarter final spots up for grabs in this three team group.

The Harps started off strong with the wind at their backs. Ciarán Comerford converted the first free of the game. The Harps pushed up on the kick outs and two points soon followed. Comerford and Podge Delaney both pointing.

Mullaney got the scoreboard moving for Castletown with a superb kick with six minutes gone.

Despite the wind Castletown were determined to kick the ball into their forwards and Martin Phelan latched onto a long ball to turn and point.

The next few minutes belonged to Castletown but they couldn’t convert. Mullaney, Bennet and Martin Phelan all missing goal chances.

A point each from Mullaney and Joe Phelan levelled the game up before the water break.

In the 19th minute The Harps regained the lead again. Aaron O’Grady’s shot for a point looped in over the Castletown keeper’s head for a goal.

However Castletown responded well and kept dominating possession. Brilliant scores from Conor(2) and Martin Phelan(2) gave Castletown a deserved lead at half time.

The Harps were lucky to only be a point down but they began to play very well from the throw in. Three scores on the bounce from Comerford, Delaney and Pat Walsh gave them the lead.

Castletown were under pressure and were unable to win a kick out.

However, Tadgh Cuddy moved to halfback and he swept up the breaks. In the 39th minute he broke onto the ball and set away John Paul Bennet who smashed the ball into the top corner.

Castletown were in the driving seat now and didn’t let up. Two incredible scores from Mullaney, one with his right and one with his left, increased their advantage.

Comerford kicked two great scores in quick succession to breathe some hope into his side with 10 to go.

However Conor Walsh put Conor Phelan through on goal soon after. Phelan  was taken down for a penalty. Mullaney stepped up and pinged the ball into the top left corner.

Despite the six point deficit The Harps kept on battling. Two more Comerford scores narrowed the gap again. Martin Phelan then pointed to steady his side.

Comerford scored a goal from a free in injury time but it was too little too late as Castletown held on for a two point victory.