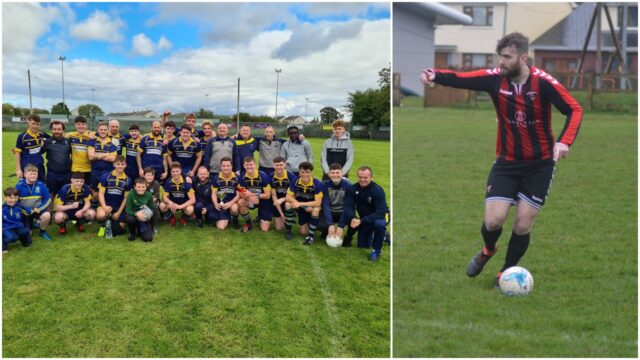 The semi-finals of the John Farrell Combined Counties Cups were played yesterday with mixed fortunes for the Laois sides involved.

Portlaoise outfit Towerhill Rovers overcame Temple Villa to reach the final against Birr who defeated Mountmellick in the other semi-final.

Meanwhile, another Laois club, Abbeyleix Athletic, tasted cup glory as they edged out Derry Rovers to claim the CCFL Shield.

Towerhill Rovers booked their place in the Counties Cup Final after an impressive performance against Temple Villa. The win sets up a clash with Birr who were victorious over Mountmellick.

Towerhill started like a house on fire dominating the ball. They started to create chances at will with finding a lot joy down the right with James Furlong and Nathan Carpenter causing the Temple Villa defence all sorts of problems.

Midway through the first half Towerhill finally got the deserved breakthrough through Emeka after good work down the right again by Furlong who played a through ball to Hayden Delaney who then cleverly back heeled into the path of Emeka who finished into the far corner of the net.

Immediately after Towerhill nearly doubled their lead with Furlong once again causing problems but the Temple Villa defence stood firm with Towerhill leading by the minimum at the break.

Towerhill remained in control for the final minutes although they had a scare as they lost possession on the Temple Villa end line, but Anthony Allen didn’t trouble Downey in goals.

Towerhill saw out the last few minutes and booked their place in the cup final setting up a clash with Birr Town on Sunday September 13.

Abbeyleix Athletic claimed the CCFL Shield title following a thrilling encounter with Derry Rovers B at the weekend.

A brace of goals from Jamie Coffey along with efforts from Eoghan Fennelly and Aaron O’Dea saw the Laois side down their Offaly opponents.

Abbeyleix took the lead after 14 minutes when headed in after a great cross from Alex Westbrook but Derry Rovers were level after 37 minutes through an own goal.

But Abbeyleix regained the lead on the stroke of half time when Aaron O’Dea latched on to a long kick from keeper Ruairi Neavyn and made it 2-1 at the break.

And it was 3-1 seven minutes into the new half when Rathdowney youngster Dylan Doyle broke down the wing and his cross found Coffey for his second of the game.

But Derry Rovers cut the deficit to a goal with 25 minutes to play and set up an exciting finish.

However, with three minutes to play, Eoghan Fennelly made the game safe and the silverware,