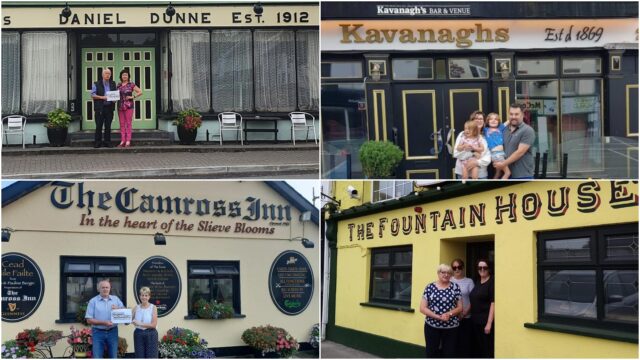 The government have announced that all pubs will be permitted to reopen on Monday September 21.

Up to now, only those who served food were permitted to do so.

However, under strict new guidelines, public houses which have been shut since March – will be allowed to operate again.

The decision is greatly welcome for local pubs in Laois, a Fine Gael Councillor has said.

Leas-Cathaoirleach of Laois County Council, Councillor Bergin said: “Pubs are an important part of the social fabric of Laois and measures such as the Restart Grant (and Restart Grant Plus) have been announced by the Government in recent months to support them, and help them be able to reopen on Monday 21st September.

“It has been an extremely challenging time for the owners of pubs, bars and nightclubs and their staff across Laois. Local publicans and their families have been devastated by the COVID-19 restrictions over the last 6 months.

“I am pleased to confirm that those businesses can in recent weeks avail of a minimum of €5,600 and a maximum of €35,000 under the Restart Grant Plus.

“This can be used to help additional expense and adaptations associated with re-opening.

“These businesses will also benefit from a waiver of court fees and associated excise and stamp duties relating to the renewal of pub and other liquor licences in 2020, as well as a waiver of excise duty on on-trade liquor licences on renewal in 2020.

“These measures are in addition to the existing Restart Grant Plus, Tourism Adaptation Fund, the wage subsidy scheme, commercial rates waiver, liquidity supports and tax measures (such as warehousing of tax debt and reduction in VAT).”

New draft guidelines for the re-opening of ‘wet pubs’ would see the 105 minute time-limit abolished in premises where a distance of two metres between customers from different households can be strictly maintained.

The guidelines, published on Sunday, were drawn up by Fáilte Ireland and include many of the same systems in place for pubs that are open as restaurants currently.

These include a requirement for customers to order their drinks at the table only, having customers off the premises by 11.30pm and the application of the 105 minute time-limit where the physical distancing is one metre.

The physical distancing of two metres required to avoid a 105 minute time-limit would not apply to customers from the same household.

Customers would also be required to remain seated in smoking areas of bars.

Under the draft guidelines, pubs would keep a record of the arrival times of their customers as well as their contact details and group numbers would be limited to six people from no more than three households.