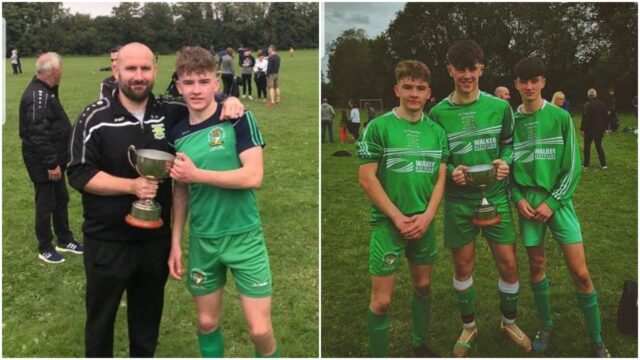 Portlaoise were crowned U-16 SFAI Regional Cup champions as they ran in seven goals in a champion’s performance against Kildare’s BBC United.

The Laois side travelled to Kildare with only 12 players which makes the performance and the win more impressive.

The away side started on the front foot with high pressing and never allowed the Kildare outfit any time on the ball.

The opening goal arrived on the 12th minute following great work from Kieran O’Donnell down the right wing which saw him swing in a cross that was met by Jamie Toman who slotted the ball past the keeper to put Portlaoise in the lead.

The second came shortly after when a wicked in-swinging cross by Robbie Farrell was turned into his own net by an unfortunate defender.

The third followed on 37 minutes as Lee Smith smashed a lovely volley into the roof of the net from fourteen yards from a lovely Kanya Tshula corner with the away team scoring at will.

Kieran O’ Donnell was unlucky to have a goal chalked off after a great move saw him slot the ball on a half volley into the bottom corner for four, but the referee ruled he was offside.

He didn’t have to wait too long though, as an almost carbon copy cross from Robbie Farrell found O’Donnell at the back post to head the ball home under the keeper’s body.

He went on to double his tally right on half time as the same players combined again with a quick free kick.

O’Donnell latching onto the ball before turning inside the defender on the edge of the box and rifling the ball right into the top corner, with an emphatic finish. Portlaoise were very happy to go into the break five up with the game beyond doubt.

BBC United came back fighting at the start of the second half, putting Portlaoise under lots of pressure but the Town’s defence stood firm and weathered the storm.

The Portlaoise keeper Kacper Banasik was called into action on 50 minutes when he showed a great pair of hands to collect a close-range header from a BBC free.

With just an hour on the clock, Portlaoise made it six when a fantastic through ball from Daniel Gorman found Jamie Toman who beat a defender before unselfishly firing the ball across to Ben Doyle to side foot beautifully over the keeper from ten yards to round off a perfect team goal.

Portlaoise rounded off their scoring for the day as Toman found the net again to round off a brilliant display just before BBC United got a consolation for their efforts just before full time.

It was a fantastic win for Portlaoise who became the first team in the club’s history to win a regional final.