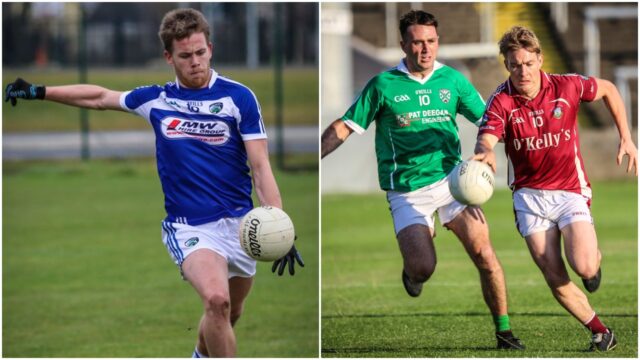 Garry Comerford was the difference as Stradbally defeated Arles-Kilcruise in Mw Hire O’Moore Park this afternoon to seal their senior status for 2021.

Comerford, who has played at wing back and wing forward in the previous two rounds, was full forward today and the move from manager Greg Ramsbottom worked a treat as he scored 1-6 of his side’s total.

Stradbally were 1/20 with the bookmakers to win this game but Kilcruise were much improved from their previous two games and made a real fight of this.

But they struggled for scores against the wind in the second half – registering just two – and they will now face Courtwood in the relegation final.

The first quarter was all about David Conway. The Arles-Kilcruise forward kicked two delightful points and then followed it with a goal after latching onto a long ball from Ross Munnelly before unleashing one into the bottom corner.

And it was only when Stradbally sent Jamie Kavanagh back in front of him as a sweeper that they began to get back into the game.

The men in green were against the wind but points from Garry Comerford and Jody Dillon drew them level 0-5 to 1-2 at the water break.

Colm Begley pushed them ahead for the first time soon after but they then lost Jody Dillon to injury and that seemed to stifle them as Kilcruise got back on top.

They spent most of the first half, while playing with the wind, with JP Conway and Alan McLoughlin operating as sweepers – but it worked as they kept Stradbally out and took a lead into half time.

David Conway and Ross Munnelly scoring late on to leave them 1-4 to 0-6 ahead.

Chris Conway extended that on the resumption with a free before a stroke of luck on 40 minutes put Stradbally ahead.

Colm Begley’s long range effort looked to be heading over but it struck the upright and landed into the grateful hands of Garry Comerford. He shimmied, and smashed it into Dermot Nolan’s net.

Comerford then scored from in front of the terrace before smashing a free from 50 metres to leave Stradbally 1-8 to 1-5 ahead at the second water break – which came after 50 minutes.

Ciaran O’Neill put four between them and a late Ross Munnelly free drew it back to the goal.

But teenager Darragh Carolan put the icing on the cake with a solo goal to finish the game and see Stradbally survive.