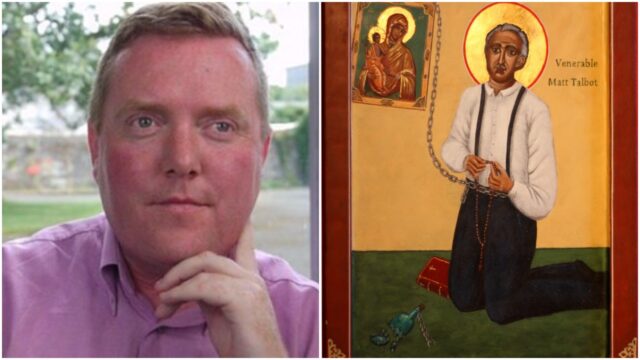 Matt Talbot was born May 1856 in Dublin Ireland. He was one of twelve children, six of whom lived to adulthood.

His father was a heavy drinker and, as a result, the family grew up in poverty. Typical of his era, Matt spent just one year at school.

There was no compulsory education and he was unable to read or write. He entered the workforce at age twelve, employed by E & J Burke, a firm which bottled beer. His drinking began with taking the dregs from the bottom of bottles, which had been returned.

Within two years, he graduated to whiskey and by the time he was sixteen, he came home drunk regularly.
By the time he was in his twenties, he spent all his wages and spare time in O’Meara’s Pub. As far as the neighbours in that area of Dublin were concerned, Matt Talbot was a habitual drunk.

Today with our understanding of the illness of alcoholism there is little doubt that he was already a chronic alcoholic. Drink had become Matt’s only interest in life. When his wages were spent, he borrowed and scrounged for money.

He pawned his clothes and boots. He supplemented his wages by doing extra work after hours. Among other things he minded horses outside a tavern, while the owners enjoyed themselves inside.

The tips he received bought him more drink. He became a thief, once stealing a fiddle from a blind man. On Saturday he would come home with just a shilling from his wages for his mother.

His life had become unmanageable. His drinking companions had several hobbies: swimming, playing cards, and girlfriends. Matt had only one – alcoholic drink.

By the time he was twenty-eight, he was well on the road to self-destruction, when a traumatic incident changed his life.

On a Saturday morning in 1884, he waited outside O’Meara’s without a penny in his pocket. He had been unemployed that week. His problem, he told himself, would be quickly solved. When he had money, he shared it generously with his drinking friends. Therefore, he reasoned, they would not reject him in his misfortune. But they did. One by one, they passed him. Some greeted him; others ignored him.

Perhaps he had scrounged money from them too often, but they left him standing on the corner. Matt Talbot was stunned and shocked. Years later, he said that he was “cut to the heart.”

But, it was a moment of grace. After some time thinking about his problem, he realised that he was totally enslaved to drink. He made his way home slowly. His mother was preparing the lunch when he arrived.

In nineteenth century Ireland it was common for someone who wished to stop drinking to take a solemn pledge before a priest to abstain for a period of time. Mrs. Talbot could not believe her eyes when Matt came home sober on that fateful Saturday morning.

Those three months were sheer hell. We understand today the withdrawal symptoms of addiction, but in 1884 Matt Talbot had no one to share his suffering – the hallucinations, the depression and nausea.

But he had an iron will, a rock-like stubbornness that stood him well down through the years. “I know that I will drink again when the three months are up,” he would remark to his mother. To fill in the time he used to spend in O’Meara’s, Matt went for a walk every evening after work.

During one of those walks his resolution almost broke. He passed Bushe’s Public House about a mile from his home just as it opened. He caught the strong smell of beer and saw the crowded bar.

The barman was busy serving the local men, and he paid little attention to this stranger waiting at the counter. Matt felt humiliated for the second time within a few weeks. Deeply hurt, he stormed out of the bar down the street and into a Jesuit Church.

That evening he made another resolution, never to carry money with him. He kept that resolution for the rest of his life.

Dropping into a Church to rest during his walks became a habit. Matt was neither fit nor religious-minded. He grew tired quickly and since he could not rest in a Tavern or sit down on a public street, a church provided the haven he sought.

Gradually he began to pray, to ask God to help him. To find the strength to remain sober he decided to attend Mass every morning before work and to receive Holy Communion.

This was very unusual in the 1880’s when the average good layman went to Mass just on Sunday and received Communion only at Easter and Christmas. At the end of three months, Matt took the pledge to abstain from alcohol for six months and finally took it for life.

Matt Talbot now turned all his effort to increasing his union with God and developing his life of prayer. The strict ascetical life of the early Irish monks attracted him.

Their love of prayer with the emphasis on penance and humility, and manual labour dedicated to God, appealed to him. He turned to a Jesuit Father, Father James Welshe to help him.

His austere daily program may shock us today in an affluent society that demands comfort. He allowed himself just four or five hours sleep at night and arose about 5am to prepare for early Mass.

Then he would return home for breakfast. Afterwards he would set off for work in the lumberyard of T. & C. Martin. He was a conscientious worker. Many years later, one of his former foremen described him as “the best worker in Dublin” who was often chosen to set the pace for others.

But at a time when Dublin labourers were often exploited, he was not a “bosses” man. He had learned to read and write and was quite ready to discuss the rights of workers.

Since he was a member of many religious associations, he attended a meeting almost every evening. When he came home about 9pm or 10pm it was time for his spiritual reading.

His spiritual reading ended about 1am, and he retired for four hours rest before beginning his daily routine again. He did not go to work on Sunday but went to one of the City Churches and would kneel in an obscure corner from the first Mass at 6am until mid-day.

Despite his austerities, Matt was a small tough man – “as strong as a little horse”, according to a fellow worker. He had an iron will and a constitution to match. Neither the other workers in T&C.

Martin’s, nor the fellow dockers on Dublin’s waterfront had an idea that he was leading a life modelled on the early Irish monks. He was a happy little man, although more silent than others.

“Matt smiled at everything except a dirty joke,” a friend remarked. But many workers knew about his generosity. Matt lent them money to buy clothes or shoes for their children or to pay overdue rent.

Matt Talbot died suddenly from a heart attack in Granby Lane on the way to Mass on Sunday, June 7th, 1925. He was buried in what was virtually a pauper’s grave in Glasnevin Cemetery a few days later.

The story of his life came to light because when his body was undressed, three chains were discovered wrapped around it.

Inquiries disclosed that he practiced a devotion known as the slavery to Mary. The underlying idea was that a person who considered himself a spiritual slave to the Mother of God would remain close to her and to Jesus, her son.

The devotion included wearing one fine, loose chain. It was typical of Matt Talbot to wear three. In 1972 his remains were removed to a tomb in Our Lady of Lourdes Church in Sean McDermott Street.

In 1975 the Holy See conferred the title “Venerable” on him, which means that from a purely human point of view, Matt Talbot has the qualifications of a Saint. If this Opinion is confirmed by the Miracles required by Canon Law, he will be canonised.