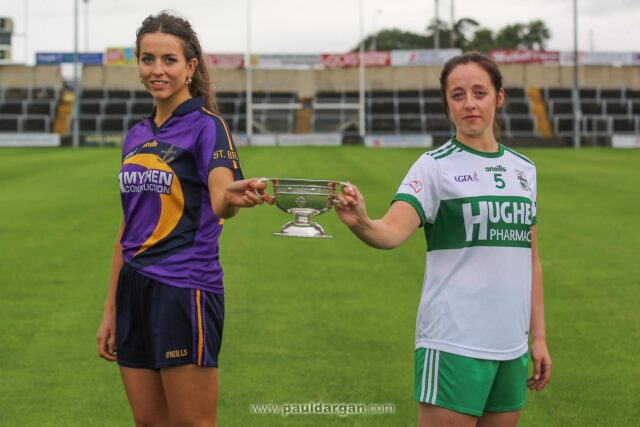 Portlaoise are through to the ladies county final after a comprehensive victory over St Brigid’s in Rathleague this evening.

Portlaoise are the only unbeaten team left in the championship and go into the final as favourites to capture the crown. But they will face eight in a row seeking Sarsfields in the decider next weekend.

Portlaoise got off to a perfect start as they rattled off three scores early on. Aisling Kehoe got the first score after three minutes. Sarah Ann Fitzgerald assisted Leah Loughman to spilt the posts.

Fiona Dooley almost got in for goal but her effort struck the post with Loughman getting her second from the rebound.

Maeve Gallagher got St Brigid’s off the mark after six minutes but Portlaoise kept the pressure on with another 1-3 before the water break.

Kehoe and a free from Shaunagh Jackson kept Portlaoise racking up the scores. Sarah Ann Fitzgerald rattled the net with a stunning strike that went in off the underside of the crossbar.

Ciara Moore pointed a free for Brigid’s before Jackson got in for Portlaoise’s second goal of the game with a fine finish to raise a green flag.

Moore pointed her second for Brigid’s with Jackson matching her soon after. Alison Taylor opened her tally with a point from play.

Fiona Fennessey got Brigid’s fourth point before Sarah Anne Fitzgerald got her first point of the game. Portlaoise would raise their third green flag before half time after a superb run by Fiona Dooley allowed her to drill the ball into the top corner.

Saoirse Byrne kept the scoreboard ticking for Brigid’s as they struggled to keep up with Portlaoise’s tough running game.

Moore pointed a free before half time as Portlaoise went into the break leading 3-9 to 0-6.

The second-half started with a new free taker for Brigid’s as Aisling Lacey pointed a free. Kehoe raised a white flag for Portlaoise before she was unlucky not to have a goal only for her shot to strike the crossbar.

Portlaoise kept their dominance in the game as they kept Brigid’s scoreless for the rest of the game. Jackson slotted over another two frees with Loughman also getting another one for herself.

Jackson then rounded the goalie to get Portlaoise’s fourth goal of the game. Portlaoise had many more chances to score goals but were denied by Aisling Byrne, the crossbar and some wayward wides.

The game ended with Jackson pointing a free and then a Camross connection came to the fore as Fitzgerald set up Kirsten Keenan to end the game’s scoring.

Portlaoise now go forward to the county final against Sarsfields on Saturday where they’ll be looking to Sarsfields winning their eighth Laois crown in succession.

SEE ALSO – Check out all of LaoisToday’s sports coverage here