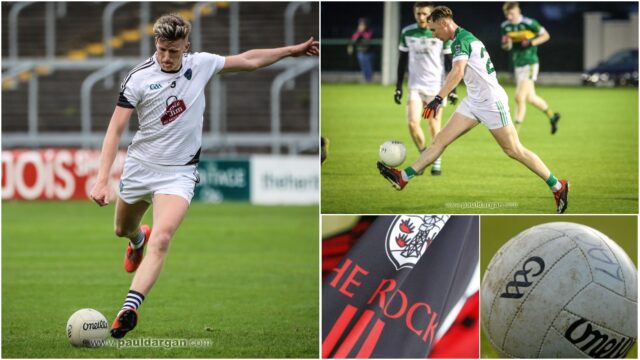 It’s been a very busy couple of weeks for the Rosenallis hurlers and footballers but they’ll be glad that their football season is at an end now as last night’s relegation semi-final win over Courtwood means they are safe and can now fully focus on hurling.

Having lost by a point to Ballyfin in their first game and then by four points to Ballylinan the last day, they’ll be thrilled to finally have a senior win under their belt.

They were nine points up at half time, only to see their lead whittled back to one before settling themsleves to eventually win 3-12 to 1-11.

Hurling now goes back to the top of their agenda and they play Clough-Ballacolla in the senior semi-final next Sunday. No rest for the wicked!

After such a promising intermediate championship triumph in 2018 and a big win over Arles-Kilcruise in their first senior game in 25 years in 2019, Courtwood now find themselves in a bit of a downward spiral with five losses in a row between this year and last year.

They did make a right good battle out of it last night against Rosenallis, coming back from nine points down at half time to get within one.

But their tendency to concede big scores this year was a factor again. They were hit for 3-12 last night following on from 2-15 against Killeshin and 7-11 against O’Dempsey’s.

They’ll have one last chance to save their senior status when they play the losers of Arles-Kilcruise or Stradbally in the relegation final.

The Laois CCC have decided to bring the semi final of the Intermediate championship forward by two weeks in order to get the final played before inter-county action kicks back in.

The semi final will now take place on Sunday September 27 and the final on the weekend of October 3.

Clonaslee and Mountmellick were knocked out of the hurling last weekend while neither The Rock nor the rest of Crettyard aside from Burke play hurling – hence why the changes can be made.

Mountmellick and The Rock are winners of the quarter finals and they will be drawn to play either Clonaslee or Crettyard in the semi finals. The draw will take place on Sunday.

4 – Two Mountmellick lads worth a shout for Laois teams

Gearoid Hanrahan is with the Laois senior footballers but there are two other members of this team who are certainly worth a look at inter-county, going by their recent performances.

David Kelly at midfield has put in a number of good performances so far – scoring freely in his last two games. In his mid-20s, he could be capable of making a step up.

While his midfield partner Cian McCann isn’t too bad either. In his first year of adult football, he is extremely powerful with a great pair of hands and looks perfect for the 2021 Laois U-20 team.

5 – Three missing players for Portlaoise give insight into weekend

Portlaoise lost heavily to Mountmellick but were without three players who featured prominently for them in their previous two games.

Ross Brennan, Andrew Swayne and Craig Rogers did not tog last night and one would have to assume that they must be in the reckoning for Kevin Fitzpatrick’s seniors against St Joseph’s on Sunday.

The Rock haven’t had much to write home about since dropping back to intermediate in 2014 and apart from a semi-final appearance in 2016, they’ve generally been among the also-rans.

But this year they have shown some really good form, recording a big win over Annanough in the first round before being unlucky to lose to Clonaslee the last day out.

Their improvement this year has been clear to see and their 2-13 to 0-13 win over a decent O’Dempsey’s side was encouraging too.

They are a well-drilled side that are really making the most of their resources and they’ll give Clonaslee or Crettyard plenty of it in next weekend’s semi-final.

7 – O’Dempsey’s hold their own

It’s not easy stepping up from junior to intermediate and even more so for a club’s second team.

But O’Dempsey’s have done relatively well this year, being competitive with Portlaoise in their first game before recording a big win over Timahoe the last day.

They trailed throughout this game but were still only two points down entering injury time and kicked 14 wides over the course of the hour.

Overall they can be pleased with their first season in this grade and it’s a very positive thing for the club to have their second team playing intermediate.