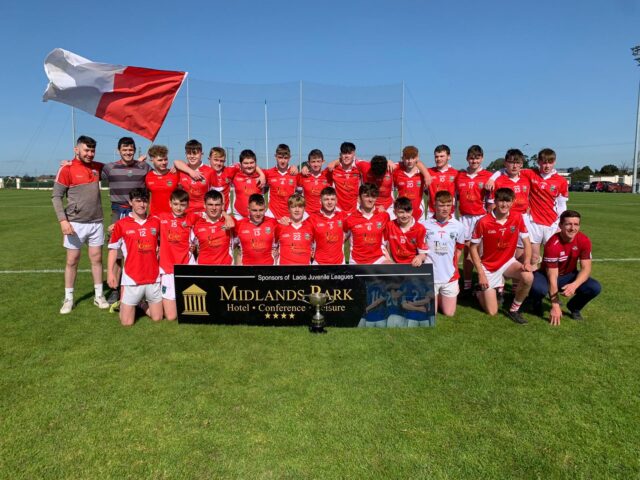 Mountrath have been crowned Minor ‘B’ hurling champions after a well-deserved victory over Ballinakill-Ballypickas in the LOETB Centre of Excellence this morning.

Ballinakill-Ballypickas started the game well but after the first water break, Mountrath asserted their dominance and took full control of the game from there on in.

Ballinakill-Ballypickas got the first score courtesy of Brian Duggan as the full-forward pointed beautifully over his shoulder. Laois minor goalie Finnian Cuddy showed his quality out the field as he got Mountrath’s first score with a super score.

Tom Kirwan tapped over a free before Duggan matched him early on as both sides began to find their feet in the game. Ryan Quinlan pointed well with Duggan getting his third with a free before Ballinakill-Ballypickas got in for goal.

The ball dropped outside the square to full-forward Jack Delaney and he rifled the ball into the bottom corner. This score took the game to the first water break with Mountrath thankful for the stoppage in play.

Mountrath made the break count as they went on to score 1-4 before half-time as they held Ballinakill-Ballypickas scoreless in the second quarter.

Cillian O’Keefe was assisted brilliantly by Cuddy before O’Keefe went on a mazy run before drilling the ball past Michael Fleming in the Ballinakill-Ballypickas goal.

Kirwan pointed a 65’ with Caelum O’Brien pointing from play. The first half ended with two fine scores from Finnian Cuddy, one of the points a superb instinctive score over his shoulder.

Mountrath went into half-time leading 1-6 to 1-4 after a superb second quarter saw them take a two-point lead into the second half.

Cuddy got things back underway with a point from a placed ball with Duggan matching him to keep the lead to two points. O’Keefe got his second point of the game with Duggan once again slotting over a free.

O’Keefe went on another run from midfield and this time he split the posts. He once again showed his class from midfield as he raised a white flag from way out the field.

Going into the final quarter, Mountrath led 1-10 to 1-6 as they still had control of the game and looking good for the victory.

Ballinakill-Ballypickas tried to rally the troops again as Ethan Drury and substitute Andrew McDonagh pointed but these would be their last scores of the match.

Mountrath kicked on once again and rattled off four more points before the end as they strolled towards victory.

Shane Callaghan pointed from play before Cuddy ended the game with three points, two 65’s and one free.

Mountrath were well deserving of their victory and apart from the first 15 minutes, they were on top in every department.