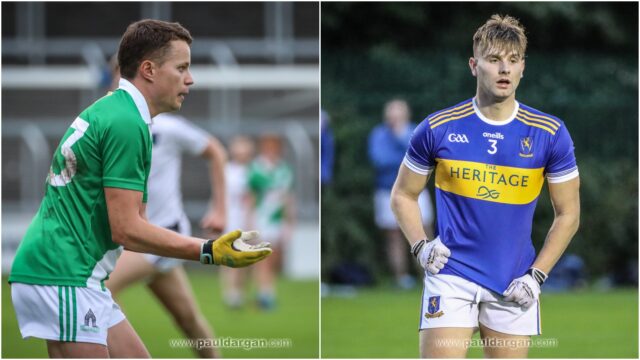 What a game that was! O’Dempsey’s are through to the Laois SFC quarter-finals following a thrilling win over Killeshin in MW Hire O’Moore Park this afternoon.

The Killenard men looked to be on their way out of the championship when sub Gavin Brennan pointed to put Killeshin three points ahead with normal time almost up.

But a Matthew Finlay goal after a great run from Barry Kelly levelled things up. Killeshin had a chance to go back in front but Evan Lowry seemed caught between about three minds and his weak shot went wide.

From the next attack Mark Barry swung over a brilliant point and then Derek
Dunne punched over with almost the last act of a thrilling game. Last year’s beaten finalists Killeshin could scarcely believe it but O’Dempsey’s can look forward to a quarter-final meeting with Portarlington, Graiguecullen or Ballyfin in two weeks.

There was never much between the teams but it seemed as if a big moment arrived in the 15th minute when Robbie Kehoe was given a straight red card for an off the ball clash with Eoin Lowry.

But the numerical advantage would last only seven minutes as Adam Deering was given his marching orders for a strike on Mark Barry.

Michael Doran kicked two lovely points in the opening quarter for Killeshin and Eoin Lowry got one. But Micheal and Matthew Finlay both pointed from play and Johnny Kelly came up from wing back to blast one over. At the water break the sides were level at 0-3 each.

And they were level 0-6 apiece at half time with Ross Bolger, Arnie Mahon and David Aston (free) on target. O’Dempsey’s scores in the second quarter came from corner-back Tom Kelly, a Matthew Finlay free and a flicked effort from Tom Behan which could easily have ended up in the net.

The third quarter followed a similar enough pattern with Matthew Finlay pointing frees either side of Ross Bolger and Luke Attride pointing from play. But the big breakthrough arrived when Evan Lowry crashed hom a goal after being set up by his brother Eoin.

At the second water break, Killeshin led 1-8 to 0-8 and they pushed further ahead when Mark McDermott pointed, though he could well have went6 for a goal.

O’Dempsey’s though were right back in it when Mark Barry converted a penalty after Dan McCormack was fouled.

But Ross Bolger’s third point pushed the gap to two and then it looked good for Killeshin when Gavin Brennan pointed.

But the drama was only starting. Killeshin had to see out the final couple of minutes with 13 men after Mark McDermott was black carded and O’Dempsey’s were rewarded for battling on to the final whistle.

Finlay wonderfully finished his goal chance and then Barry – who had been quiet by his standards – landed an excellent point. Dunne then made sure of it.