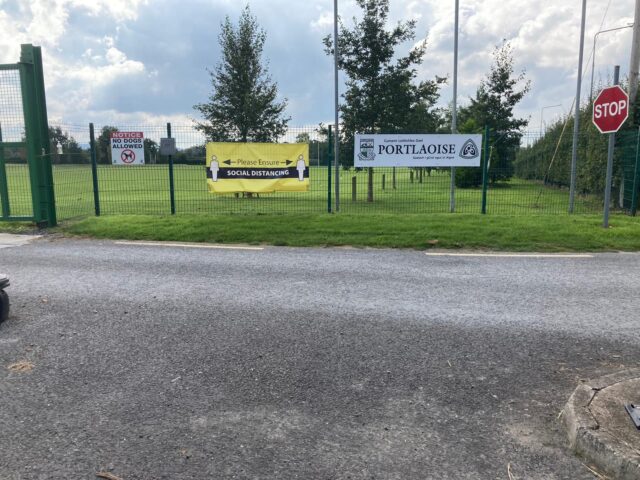 A pedestrian crossing, a path and a decreased speed limit should be put in place at the Portlaoise GAA grounds at Rathleague outside the town.

That was the argument put forward at the recent meeting of the Portlaoise Municipal District in Laois County Council.

Cllr Willie Aird said it was his fourth time to make the argument and hit out at the TII (Transport Infrastucture Ireland) for not listening to people in the locality.

Simon Walton, Director of Services in Laois County Council, explained that a local authority cannot change speed limit on a national road like the R425 where the Portlaoise GAA grounds are located.

Currently the speed limit on that stretch of road is 80km/h but a path and pedestrian crossing can only be in place if it is 50 km/h.

Mr Walton explained that is not as simple as changing the signs and that changing a speed limit has to go through a statutory procedure and if it isn’t then the speed limits cannot be enforced by the law.

But Cllr Aird expressed his frustration that Laois County Council don’t have the authority to make a decision based on “common sense”.

“If the will is there, we have to find a way,” he said. “The TII don’t know the area like we do. It’s our job as elected public representatives to ensure the safety of the people we represent.

“There’s loads of people out walking and cycling. I’ve never seen anything like it.

“Here’s a golden opportunity to allow people walk to the most used amenity in Portlaoise. Nobody should have the authority to tell us not to reduce the speed limit. Common sense has to prevail.

“There was a time that area was out in the country – now it’s an urban area. We want to put a footpath there and we want the speed limit reduced. And nobody (among the councillors) have a problem with that. When you’re in an urban area like that you have to slow down.”

“If that was a school up there, there’d be no expense spared and rightly so,” added Cllr Noel Tuohy. “And rightly so.

“This is just the townies looking out for ourselves. There’s hundreds and hundreds of kids all over Laois and teams from Kildare playing games there every weekend.”

“Coming out of Abbeyleix past the Heritage House, the speed limit actually increases and there’s a minimum of 50 or 60 houses. It goes from 50km/h to 80km/h.”

Cllr Catherine Fitzgerald added that “we have to go by the TII but you can’t beat local knowledge”.