Kelly O’Neill fired 1-6 and corner back Sara Kerfah was everywhere as Graiguecullen claimed the Laois Ladies Junior football title in Annanough this evening.

Jimmy McDonald’s side led from start to finish and, aside from a small blip from before half time, were far too powerful for a competitive Ballyfin side who never gave up.

O’Neill was flawless in front of goal while Kerfah covered every blade of grass and was rightly named Player of the Match.

Graiguecullen were the favourites for this game and they played like that for all bar one minute of the first half.

They pinned Ballyfin into their half and led by eight points with a minute of it to play before a dramatic finish.

Sally Amond, Sinead Smith and the impressive Kelly O’Neill got proceedings underway with Ballyfin taking until the ninth minute to open their account via a Chloe Scanlon free.

But Graigue kept going on the front foot and their next attack resulted in a goal as Lauren Walsh’s 21 yard free was punched into the net by Essmay Murphy for the game’s opening goal.

Corner back Sara Kerfah and corner forward Kelly O’Neill raised further white flags to leave Graiguecullen 1-5 to 0-1 ahead at the water break.

Ballyfin grabbed their second point of the contest on the resumption through Sinead O’Rourke but further Graigue scores from O’Neill and Murphy left them eight clear as we entered the closing stages of the half.

And what drama they proved to be as from nowhere – Ballyfin scored two goals.

The first came when Chloe Scanlon’s shot for a point hit the upright and then the crossbar before the ball came to Rachel Walsh who finished to the net.

And less than a minute later, a green flag was waving again when a lovely handpassing move involving Aine O’Rourke and Liadon C-Fennell ended with a bullet from Edel Finn.

Ballyfin had stormed back into the game and trailed by just two at half time – 1-7 to 2-2.

Ballyfin had a great chance to take the lead in the opening minute of the second half when substitute Rachel Wheeler got in one-on-one with Graiguecullen keeper Chelsie Nolan but she made a stunning save to deny a third goal.

And that save was crucial as it seemed to settle Graigue who grabbed the next three points via Sinead Smith, Kelly O’Neill and sub Courtney Forbes.

Chloe Scanlon was Ballyfin’s only scorer in the second half and she cut the gap by the second water break – 1-10 to 2-3.

However, Graiguecullen put the game to bed ten minutes from full time when a clever free from Lauren Walsh found Kelly O’Neill and she made no mistake from close range.

Ballyfin to their credit kept going after that with three Chloe Scanlan points but they needed goals if they were to turn this around.

Instead, Graiguecullen saw out the game well with further points from O’Neill, Sinead Smith and substitute Caoimhe Fitzpatrick.

After relegation last year, they will now play at intermediate level in 2021 following this impressive victory. 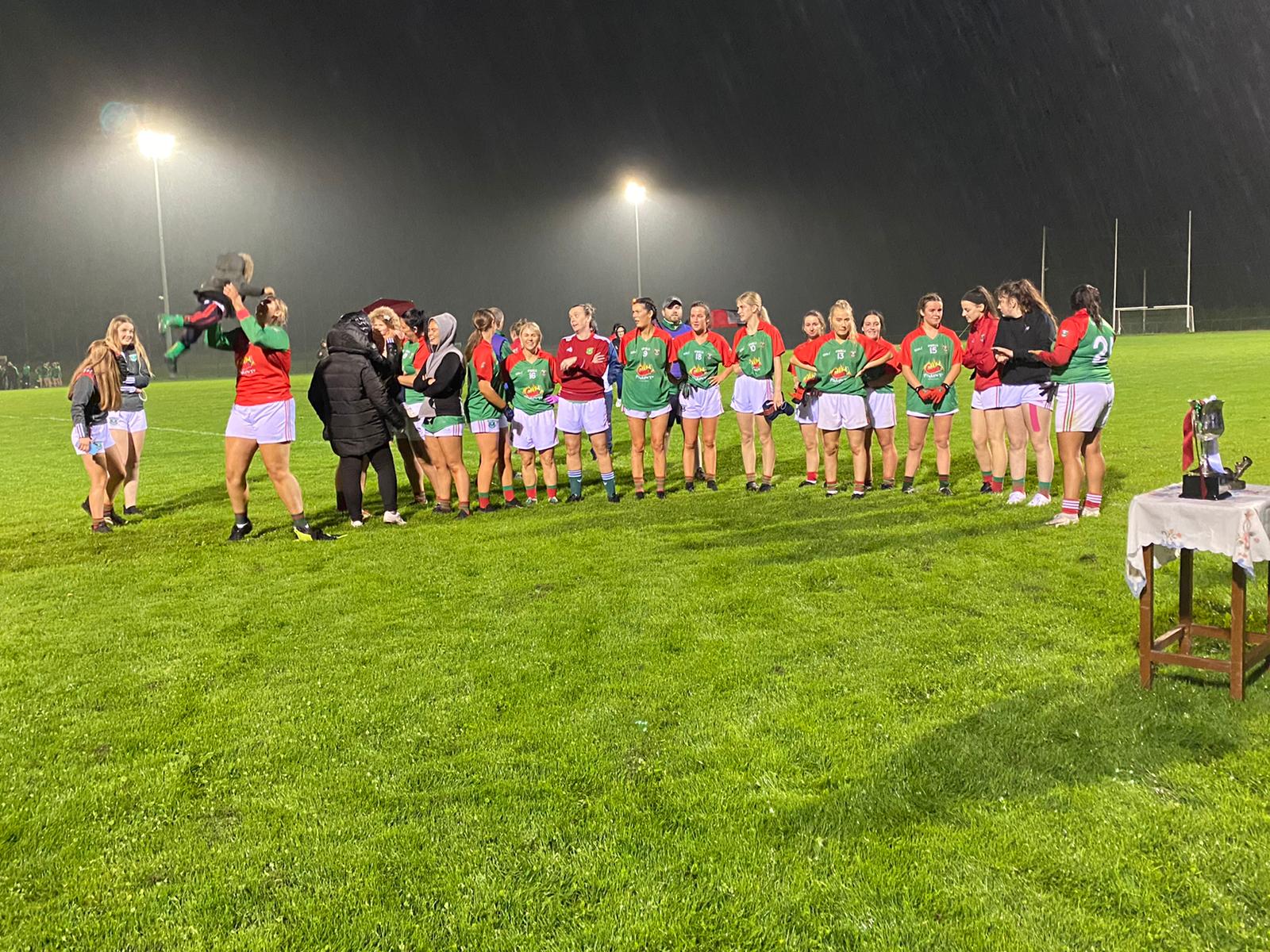 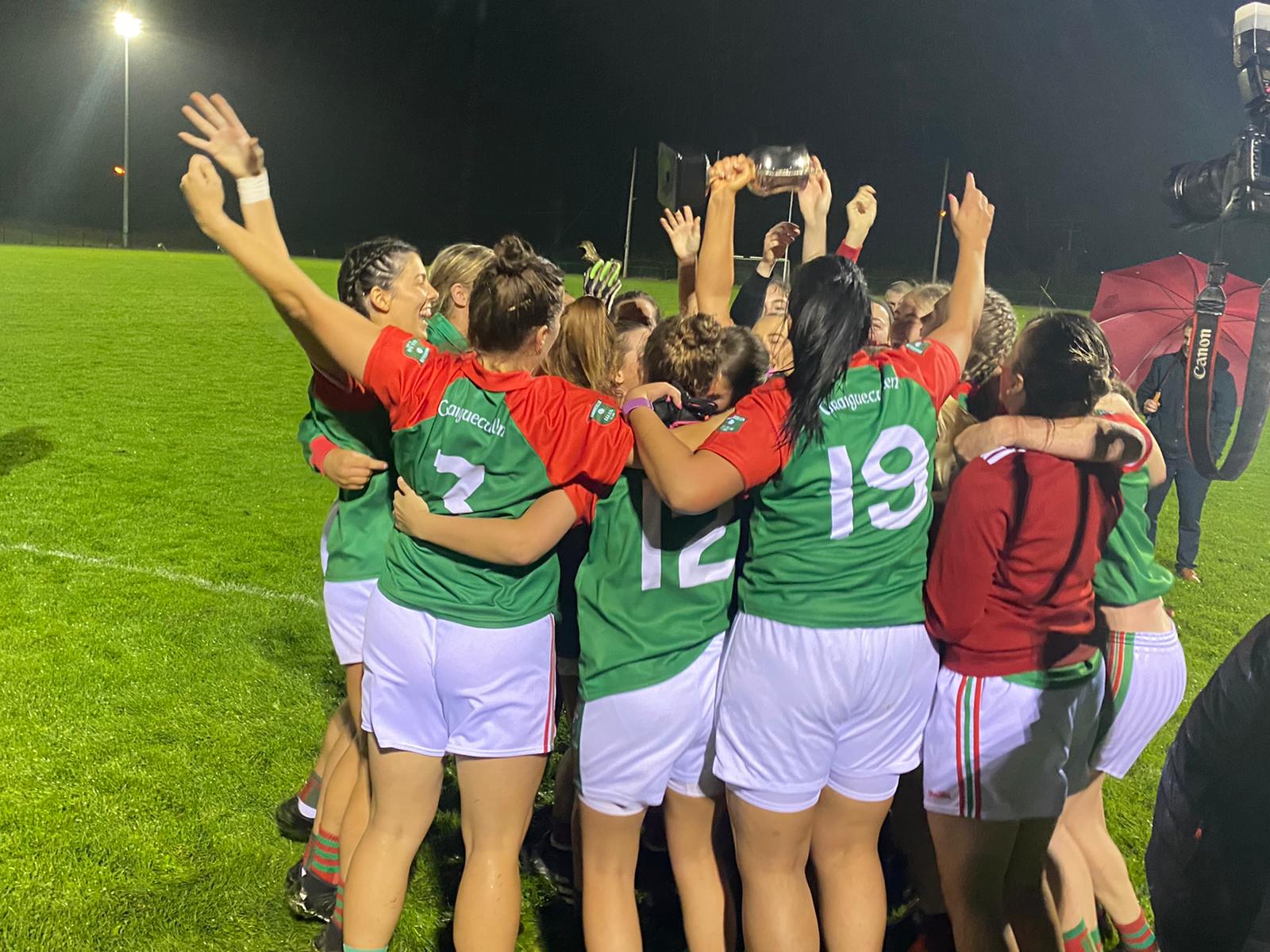