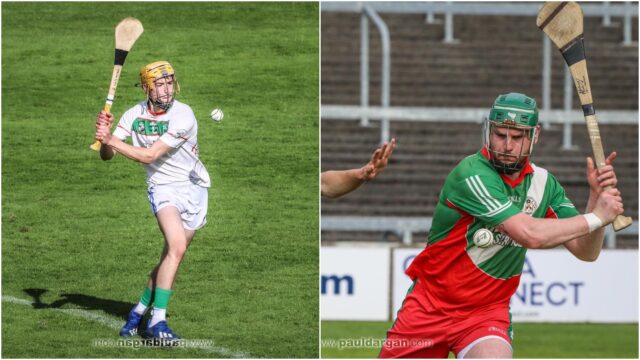 Borris-Kilcotton avenged their 2019 Laois SHC final defeat to Rathdowney-Errill to seal their return to the final at O’Moore Park today.

In a thrilling game of hurling, the 2016 champions had two second half goals from PJ Scully and Stephen Dunphy to thank for guiding them back to the SHC final.

The game started at breakneck speed, with Neil Foyle hitting a point after about ten seconds and Brandon McGinley hit back with a goal 30 seconds later.

Anyone in attendance or tuning in would have been hoping for a start like that and the opening stages certainly didn’t disappoint. PJ Scully hit back for Borris-Kilcotton with a sweetly-struck sideline from the right wing, and Ross King soon cancelled that out with a free.

Scully again lead the charge for Borris-Kilcotton as he landed a free from his own 65 yard line, as we now had five scores in the opening five minutes.

Aaron Dunphy and King (free) swapped scores before Borris-Kilcotton went ahead for the first time since Foyle’s early point, as Scully (free) and Emmett Jones hit the target to see them one up at the water break, 0-6 to 1-2.

Rathdowney-Errill wasted little time in drawing level when play got back under way, as King again pointed a free, as the tit-for-tat nature of the scoring in the half showed no signs of letting up.

The teams continued to go scores for score until the last five minutes of the half, as Borris-Kilcotton rattled off three on the trot from Stephen Phelan, Stephen Dunphy and Scully (free) to lead by three, 0-12 to 1-6, with normal time almost up.

That helped them to put a buffer between the sides, and even though Rathdowney-Errill broke that scoring run with a couple of points from King and Joe Fitzpatrick, Borris-Kilcotton were still three up at the interval, 0-14 to 1-8.

The start of the second half was the stuff of dreams for Borris-Kilcotton, as they had the ball in the back of the net after 34 seconds. PJ Scully provided it, drilling a shot to the net from 20 yards out after jinking away from Jimmy Corrigan.

Paddy Whelan added a point soon after and then Joe Campion and Scully (free) made it 1-3 without reply, as Borris-Kilcotton stormed into a nine point lead.

Rathdowney-Errill were stunned but had to get going quickly or they were out of the championship, and to their credit they did just that. Ross King broke the Borris momentum with a free, and they then moved Paddy Purcell from his sweeper role further up the field.

Thep Fitzpatrick launched over his second and Purcell then hit a brace, one from either wing, as Rathdowney-Errill made it four in a row to get back with five.

That should have come down to four soon after but Ross King opted to go for goal from a free just outside the 21. Borris-Kilcotton saved it and hit the next point through PJ Scully, going six clear and never looking back from there.

Rathdowney-Errilk kept the game interesting and posed a threat when they could, but they just were clinical enough in attack to get close enough to Borris-Kilcotton.

They did manage to get back within five towards the end of normal time, but Borris-Kilcotton then put the seal on the victory as Stephen Dunphy raced through to score their second goal, and book their place in the 2020 decider, as they look to make up for last year’s disappointment.