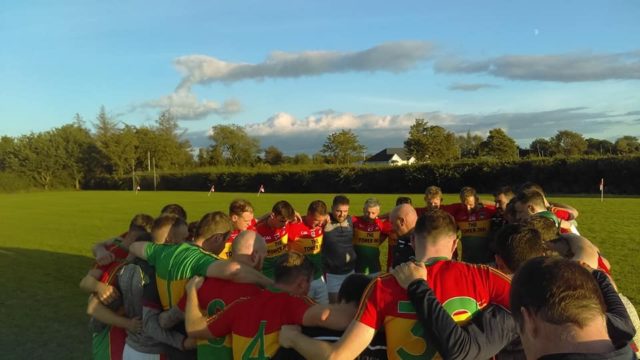 Park-Ratheniska-Timahoe have retained their intermediate hurling status for another year following a nine point win over Ballypickas in Raheen this afternoon.

David Cuddy’s charges had too much for a Ballypickas side who were without the likes of MJ Lalor and Liam Lalor – and they suffered as a result.

They made a bit of a game of it with an early second half goal but Robbie Foyle was on top form for Park-Ratheniska-Timahoe and his haul of 1-9 was the difference.

The victors came flying out of the traps and scored the first six points of the game in the opening ten minutes.

Robbie Foyle helped himself to four of those with Damien O’Connor and Geoff Kennedy notching the others.

They also had goal chances too with keeper Noel Concannon doing really well to thwart Foyle from close range before Paddy Kelly had a shot which beat the Ballypickas stopped but came back off the butt of the post.

Paddy Boggan finally opened Ballypickas’ account with long range score but a Brendan Fingleton point left it 0-7 to 0-1 at the water break.

Daire McWey and Paddy Boggan cut the gap to four on the resumption of play but PRT responded with points from Jimmy Langton and Robbie Foyle – before getting the game’s first goal.

Mick Brennan did really well to force the ball to Robbie Foyle and he charged at goal before beating Noel Concannon with a low shot.

Ballypickas ended the half well with a brace of points from Paddy Boggan but they trailed 1-9 to 0-5 at half time.

And they got a real lifeline at the start of the second half when referee JJ Gorman spotted a foul by Joe Foyle and signalled for a penalty.

Daire McWey took it and although PRT keeper Brendan Dowling got a touch on it, he couldn’t keep the ball out.

But Ballypickas would only score one more point in the time that remained as Park-Ratheniska-Timahoe got going again to win well.

Sub Pa Foyle lodged over a free before Robbie Foyle hit four in a row to leave clear daylight between the teams again.

Ballypickas had wing forward Kieran Bowe sent off towards the end and a late Paddy Boggan point was all they could muster.

Pa Foyle and Brendan Fingleton made the win safe and ensured PRT will play at this level again in 2021.

Ballypickas lost this relegation final last year too but were saved due to the formation of Colt-Shanahoe. Unless something like that happens again, they will play Junior A next year.