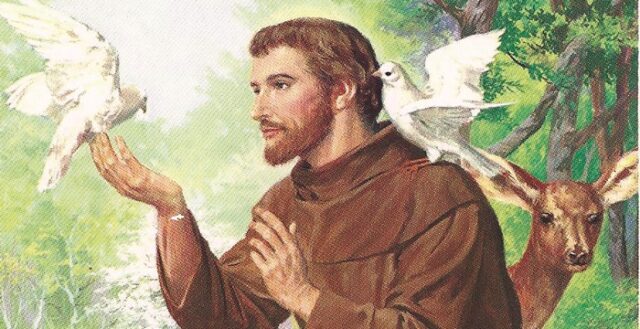 Upon his election in March 2013, Pope Francis said: ‘Some people want to know why I wished to be called Francis. For me, Francis of Assisi is the man of poverty, the man of peace, the man who loves and protects creation.’

Since then, the Pope’s Franciscan “accent” has become increasingly evident. His manner of living is both faithful to the teachings of Jesus and illuminated by the spirit of the “poor little man” from Assisi.

The title of Pope Francis’ encyclical on the environment Laudato si is taken from the first line of St Francis’ Canticle of the Creatures which is one of the best insights into the saint’s vision for life.

It is crucial to grasping how St. Francis understood the message of the gospel — and may offer a glimpse into Pope Francis’ own vision for the world.

After his election as pope, it was revealed that Pope Francis had been the runner-up in the previous conclave in 2005 that elected Pope Benedict.

But in 2013 it was generally thought that Jorge Bergoglio was too old to be considered again, and he must of thought so himself, because he bought a round-trip ticket from Buenos Aires to Rome for the election.

Yet, as the conclave proceeded, Bergoglio had to think again what being pope could mean, and what name he would choose if he were elected.

By becoming Pope Francis, he managed to express in that name much of what he hoped to accomplish during his papacy.

St. Francis of Assisi was synonymous with themes Pope Francis quickly made his own: He was devoted to the poor, he preached God’s mercy, he sought to reform the church and he was passionate about caring for Creation.

The annual feast of St. Francis invites us to reflect on the life of the saint and to ask if his namesake has succeeded in advancing his vision for the Church.

Within hours of his election, Pope Francis quoted Pope John XXIII’s wish to bring the global church closer to the poor and to its original mission expressed by Jesus when he began his ministry in Nazareth quoting the prophet Isaiah, saying he was “anointed to bring good news to the poor.”

Pope Francis has worked steadily to address the needs of the poor by challenging income inequality, the exploitation of workers, by pleading for migrants displaced by war, changing weather, industrial pollution, dumping and the indiscriminate and unequal consumption of natural resources.

He proclaimed a Year of Mercy to promote God’s unconditional love and to focus on reconciliation within the church as the face of God’s mercy to sinners.

Jesus told St. Francis to “repair my church,” and Pope Francis has been tireless in seeking to reform governance and internal structures, financial accountability and by addressing the scandal of child sexual abuse that has so damaged the church’s credibility and its ability to evangelize.

Perhaps Pope Francis’ most urgent task has been pleading with nations and world leaders to protect the planet, “our common home,” as the one goal and challenge that will determine all other changes needed to avert disaster now and for future generations.

St. Francis modelled simplicity and evangelical poverty as the antidote to a medieval church losing its identity because of wealth and corruption.

His community of friars grew rapidly as young people found a way to live purposely and free of material greed and preoccupation with status and power.  St. Francis imitated the poor Jesus and his passionate love for the poor.

Pope Francis has not shied away from sounding the alarm and probing the consciences of our age about what history will say of those who knew what was coming but did nothing.

St. Francis, who died at age 44, exhausted by his efforts to repair God’s church and protect the planet and God’s poor, now speaks again to us on his feast and through his beloved and courageous brother, Pope Francis.