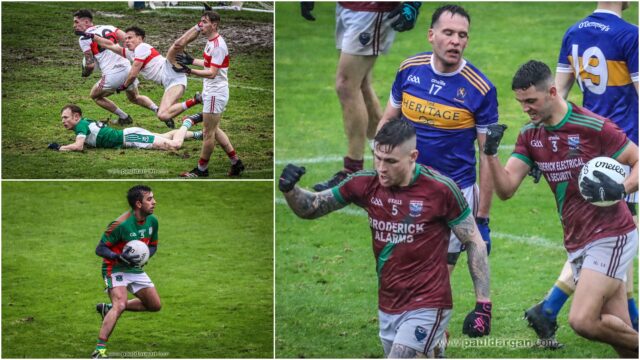 Emo’s win over Portlaoise was the result of the weekend and while Portlaoise aren’t the team of old, it still takes a fine performance to beat them.

History was against Emo as they had come up short against Portlaoise so often in the past, most recently when Portlaoise needed a replay in the 2015 final. Indeed it was Emo’s first knockout championship win over Portlaoise since 1972 though they did beat The Town in a group game in the early 1990s.

They had previously scored the last four points to come from behind to beat O’Dempsey’s in Round 2 and this latest success means that have beaten the three-in-a-row champions Portlaoise and O’Dempsey’s and Killeshin – the beaten finalists of the past two seasons – to reach the last four.

Nobody will fancy playing them in the semi-final.

Until they were actually knocked out, Portlaoise were still the team to beat. They were, after all, going for a fourth title in a row and a 13th in 14 years.

But their loss means that it’s their earliest championship exit since they were beaten in a playoff by O’Dempsey’s in 2006. Since then they have contested 14 finals in a row.

But is this defeat a sign that that great team is no more? They’ve been wobbling for the last couple of years and only scraped through last year’s championship with narrow wins over St Joseph’s, Portarlington and Killeshin before their struggles continued in Leinster against St Pat’s of Wicklow where they needed penalties and then suffered a bad beating against Eire Og of Carlow.

But as a club they haven’t been producing the same standard underage teams over the past decade as they had in the previous one. Between 1997 and 2007, Portlaoise won nine out of 11 Laois U-21 titles. In the 13 seasons since, they have only won one. They haven’t won a minor since 2012.

While they had been able to introduce one or two quality players each year to supplement their all-conquering side, they haven’t been bringing through the same quantity of quality.

When Portlaoise’s great team of the 1980s came to their natural end with back-to-back senior titles in 1990-91, they didn’t win another senior until 1999 and only appeared in one final in the interim.

There’s no reason to say this current group can’t bounce back in 2021 but we could be coming into a more evenly-balanced era where a handful of teams have realistic hopes of championship glory.

3 – Port on top in local derby

While they only won by four points, Portarlington never looked in any real danger in their local derby against O’Dempsey’s.

Having beaten Portlaoise in their last game four weeks ago, they could have been vulnerable here though being drawn against O’Dempsey’s always guarded them against complacency.

They got off to a great start here by scoring the first four points and they never trailed from there to the final whistle.

Conditions meant it was never going to be a free-flowing open game and it was a real war of attrition. But Portarlington had plenty of players willing to dig in and work hard and they fully deserved their win.

O’Dempsey’s will be disappointed with their performance but Robbie Kehoe’s suspension followed by both midfielders going off – Bryan Nugent on a second yellow and Barry Howlin injured – meant they were always facing an uphill battle.

Like Portarlington, Graiguecullen never looked like losing against Ballylinan after Ross Hennessy got the game’s first goal after just six minutes and they led from start to finish despite playing into the wind in the first half.

Mark Timmons won his battle with Gary Walsh and Ballylinan didn’t have enough other scorers to step up. Walsh finished 1-5 of their 1-6 tally but Ballylinan didn’t cover themselves in any glory with two straight red cards late on – one for Walsh and the other for Jamie Farrell.

Graigue, however, were fully deserving winners and are now back in the semi-finals for the third time in four years.

Their consistency has to be applauded but ending one of the longest famines in Laois GAA – they last won the senior championship in 1965 – has to be the target.

They have as good a chance now as they have in a long time.

5 – Semi-finalists confirmed in Junior ‘A’

The Laois JFC ‘A’ grade is now down to the last four and will see two local derbies in the semi-finals.

The Heath’s second team got the better of Castletown in a low-scoring affair and will now play Portlaoise’s third string in the semi-final. Meanwhile, Ballyroan-Abbey’s second team had a good win away against St Joseph’s and they will now play Park-Ratheniska, who are they only first team left in the competition.

Both semi-finals are scheduled for next weekend while the final is down for the weekend after.

The Portlaoise ladies were back in action just eight days after their breakthrough Laois SFC final win when they were 3-5 to 2-5 winners over Offaly champions Naomh Chiaran.

They now go forward to a first ever Leinster final and will play Dublin champions Foxrock-Cabinteely next weekend.

7 – Mixed fortunes for Laois managers outside the county

This time of the year is always busy on the county final scene and two Laois managers found themselves in the thick of the action outside the county on Sunday.

Former Portlaoise manager Malachy McNulty guided Rhode to a 1-9 to 1-7 win over Tullamore in the Offaly SFC final. It was Rhode’s 30th Offaly senior championship success.

In Meath, former championship winner with Arles-Kilcruise, Lar Wall, was in charge of Kells side Gael Colmcille who were looking to win their first senior title in 29 years.

And were denied in the most heart-breaking of circumstances as Ratoath scored a penalty seven minutes into injury time to win 1-14 to 1-13.